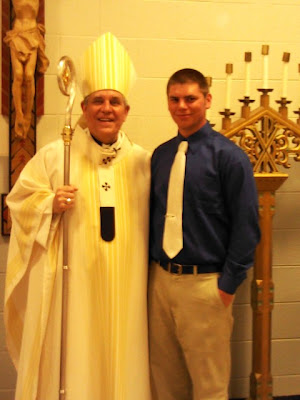 My son Justin received the Sacrament of Confirmation on April 14th through the hands of Archbishop Listecki. It was a blessedly memorable occasion to witness my son, after three years of preparation, being sealed with the fragrant Chrism which forever after marks him as God's precious and chosen son through the love of the Holy Spirit dwelling within his soul. The church was electric with Easter joy and the love of God during the three hour Mass. The word "heavenly" would be an accurate description of the atmosphere.

I was blessed to serve as a lector for the Mass and as I was standing near the altar during the Gloria and the sprinkling rite, the Archbishop didn't wave the asperger in my direction to bless me, instead, he put a bit of holy water on his fingers and then blessed me by making the sign of the cross directly on my forehead with the holy water. It reminded me of the many times I had made the same action of blessing my children with holy water when they were small and I felt like a little child again receiving a special blessing from my spiritual father.

My son Jack and my daughter Mary had been asked to serve at the Mass. Jack had served at the confirmation Mass last year when my son John was confirmed by Bishop Sklba but Mary had just been trained to be server last fall and has only served at Mass a handful of times so this was such an honor to be asked to serve for the Archbishop at this extra special occasion and she was very nervous. She was all wide-eyed and beautiful as she reverently attended to her duties at the altar for this very solemn occasion. I was so proud of both of my little servers.

Archbishop Listecki's homily was both entertaining and uplifting. He began by speaking about the importance of choosing a Confirmation name wisely. He shared a story of how his mother had wanted to name him Harry, after his father, but at his baptism the priest discouraged such a pagan name and told her to name him Jerome after that wise and knowledgeable saint. He said that he chose the name Lawrence for his Confirmation name so had he been named Harry he would have been Harry Edward Lawrence Listecki with the initials spelling HELL...o! Thank goodness my mom named me Jerome, he said, so now my initials spell JELL-o, and there's always room for jello!

Then he said that he was going to question the confirmands about their faith and he took one young lady by the hand and brought her up to the altar to question her. He said that one of the goals that many of the young people mentioned in their letters to him was that they hoped to become closer to God through the Sacrament of Confirmation. He told the young lady that as he reached for her hand he saw her look to heaven and say "Dear God, not me!" And her sponsor looked to heaven and said "Dear God, not her!" And everyone else looked up to heaven and said "Thank God it wasn't me!" So already you are all a little closer to God! Then he simply asked her to name the first Sacrament that a person receives and she correctly answered "baptism" and he then escorted her back to her seat explaining that the real questioning comes when they make their profession of faith.

At the end of his homily he stressed the importance of the cross as the sign of unconditional love and said that he wants everyone to retain the knowledge that no matter what happens to them in their lives God will always love them unconditionally. Then he thanked the parents of the confirmands for instilling the gift of faith in their children and for being willing to fight with their children to make sure they attend Mass each week and follow the teachings of the Catholic faith. Finally he thanked the confirmands. He told them that with their "yes" to Jesus they have enriched the Catholic faith for everyone.

At this point my husband Paul noticed me scribbling furiously in my journal during the Archbishop's homily and he leaned over and whispered in my ear, "Why don't you ever take notes when I talk to you?" :)

As each of the 66 confirmands approached the altar for the Sacrament, Archbishop Listecki took his time speaking individually to each of them asking them about the name that they have chosen for their confirmation and quizzing them with questions such as "Is St. Michael a male or a female?" The answer was neither since St. Michael is pure spirit without a gender. And for those who chose the name James he wanted to know if it was for St. James the Lesser or St. James the Greater. It was evident that he was enjoying the Confirmation process as he could be seen laughing all the while he was confirming the teens. The Archbishop did all he could to make sure that being confirmed in the faith would forever after be a life-changing and memorable Sacrament for those who received it.

And now my Justin is confirmed in the faith and he is so grateful to have received the Sacrament that has sealed him with the gift of the Holy Spirit. One more soul for the Lord! I rejoice and praise the Lord!
Posted by Anne at 9:40 PM