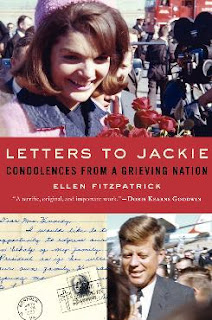 I recently spent some time helping a friend organize his magnificent library of books, which includes a large historical section, when he came across the book Letters to Jackie, Condolences From a Grieving Nation in the stacks.  Knowing that I love to read personal letters, and having enjoyed it very much himself, he handed it to me and invited me to read it.  I am so grateful for that invitation because this book was fascinating!  And despite the fact that this was not the type of book that I typically read, that is, a spiritual book, I found that I was compelled to frequently stop and prayerfully ponder what I had read  more than I would normally do with most spiritual reading.

According to author Ellen Fitzpatrick, Jackie Kennedy received 800,000 condolence letters in the two months that followed President Kennedy's assassination on November 22nd, 1963, and within two years that amount reached over 1.5 million.  Most of the letters remained unread until 2010 when Ellen Fitzpatrick began to sort through them for this book.  After choosing 250 of the 200,000 pages of letters that are still stored in the National Archives to include in this collection, she then began the work of contacting the letter writers and includes a brief biography of each of the people who took the time to pen a note of sympathy to the former First Lady.  The result is a timely look at the compassionate heart of the American people.

Included in this collection of letters are the stories of the poor, the racially oppressed, veterans of war, widows who could personally empathize with Jackie's loss, those who voted for JFK as well as those who did not, those who loved him because of his Catholic faith and those who disliked him because of it, the elderly, the sick and even children.

Here is a segment of my favorite letter.  It was written by an 8th grade student at a Catholic Grade School in California:

...On the morning of November 22nd, our school of 750 pupils were at a requiem Mass for all the deceased of parish.  At the beginning of the Mass, we were told that our beloved president was shot.  I tried to tell myself he would be all right but somehow I knew he wouldn't.  I tried to control myself as I had to play the church organ but the tears wouldn't stop.  The slightly damp keys were hard to play but I offered it up that the President might live.

Though we didn't know it then but while 750 children with tear-streaked faces and slightly reddened eyes were receiving Holy Communion, the 35th President of the United States went to his eternal reward in heaven...."

Each letter is deeply touching, the writers sharing their personal experience of what President Kennedy had meant to them as well as how the loss of his life had caused them deep grief.  A common message was that of gratitude for the strong and brave countenance that the First Lady maintained during her entire experience of national and personal grief.

With the presidential elections only a few short days away, it seems like the perfect time to look back upon this tragic and important time in American history and to recall that regardless of the outcome of this election we are all united as Americans, we all share a common love for our country, and we are all created with a deep capacity for love and goodness.

In light of the upcoming election, I urge you to read these brilliantly written columns by Archbishop Listecki and Bishop Hying regarding the importance of voting for a candidate that will uphold the dignity of life and the value of religious freedom which can be found at these links:

Vote for Culture of Life by Archbishop Listecki