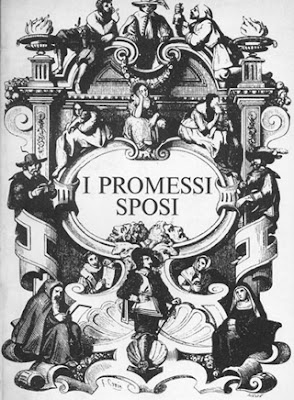 In Pope Francis' interview, A Big Heart Open to God, he shared the title of his favorite book, The Betrothed, by Alessandro Manzoni.  Regarding this book, the Pope shared:

“I have read The Betrothed, by Alessandro Manzoni, three times, and I have it now on my table because I want to read it again. Manzoni gave me so much. When I was a child, my grandmother taught me by heart the beginning of The Betrothed: ‘That branch of Lake Como that turns off to the south between two unbroken chains of mountains....’"

That beginning line was enough to entice me, and so with the Pope's recommendation, I immediately requested the book from my favorite library, The Salzmann Library, at Saint Francis de Sales Seminary in Milwaukee.  Much to my joy, they were able to fill my order immediately.

The Betrothed, a work of historical fiction set in the early 1600's in and near Milan, Italy, is quite long at 537 pages, and it took me several weeks to complete, but they were weeks well spent in slowly relishing every word of Manzoni.  The tale of Renzo and Lucia, filled with love, betrayal, intrigue, suffering, conversion, and forgiveness was magnificent, and although so much of the story involved a tale of sorrow with a thorough description of the sufferings inflicted by the plague, the author was sure to include clever little sayings that brought a smile to my face, such as this comment regarding the failings of Bortolo, a minor character in the story:  "Perhaps you, reader, would prefer a more ideal Bortolo?  If so, then all  I can say is, make one up for yourself.  This one was like that."

By far, the highlight of the story came in the middle of the book, when the reader was introduced to Cardinal Federigo Borromeo, the cousin and successor of St. Charles Borromeo.   I couldn't help but see a great resemblance between the characteristics of Cardinal Borromeo and those of our own dear Pope Francis.  See if you don't notice the similarities yourself.  Here's Manzoni's description of Cardinal Borromeo:

"Federigo considered alms-giving proper as a very first duty; and here, as in everything else, his actions were in accordance with his principles. His life was spent in continual lavishing of money on the poor...

This man's inexhaustible charity showed not only in his giving but in his whole bearing.  Easy of access to all, he felt it a special duty to have a pleasant smile and an affectionate courtesy towards those who are called the lower classes, particularly as they find so little of it in the world...

He was very rarely irritated, and was admired for the sweetness of his manner, and for his imperturbable  calm; this might be attributed to an unusually happy temperament, but was in fact the result of constant discipline over a disposition naturally lively and impulsive.  If there were times when he showed himself severe, even harsh, it was towards those of his subordinate clergy whom he found guilty of avarice or negligence or any other conduct opposed to the spirit of their noble ministry...

...this same modesty, this dislike of predominating over others, was equally apparent in the commonest occurrences of life.  Assiduous and indefatigable in organizing and disposing when he considered it his duty, he always avoided intruding in other people's affairs, and even did all that he could to avoid doing so when he was asked to; a discretion and restraint unusual, as everyone knows, in men zealous for good like Federigo."

I found The Betrothed to be greatly inspiring, causing me to desire to become more Christ-like and forgiving to those in my own life who have brought pain and sorrow to my days.  I highly recommend a slow and meditative reading of Manzoni's The Bethrothed , so that, like Pope Francis, you too, may claim it to be one of your favorite literary works.
Posted by Anne at 9:19 AM