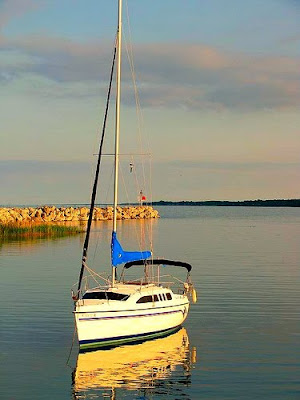 The only audible sound was that of the waves quietly lapping over the rocks. A cold, damp November wind blew around me causing me to pull my coat collar tightly around my neck. I kept my head bent to the ground, looking for glints of sea glass on the sandy shore. As I followed the shoreline around the bend, I saw the boat anchored not too far from land. That boat, anchored in the same spot all summer long and now heading into winter, had captured my attention time and again. I wondered who it might belong to and why had they left it there. Did someone live on the boat and row to shore each day for work? Were they cold and lonely living out there? Could I live like that? Those were my usual thoughts, but today, something seemed different. Maybe it was because I approached the boat from the north, the opposite of my normal routine, but now, I could clearly understand the story of the boat.
It had belonged to Peter. Day after day he worked the lake, catching those mighty fish that jumped through the surface with reckless abandon. How he envied the fish, wishing he could somehow escape his dull and dreary life on the water, but nothing else had captured his heart and held it like the water did. He knew that he was meant to spend his days and nights on this cold and endless lake, thoughts drifting across the horizon without ever showing any signs of change in the future, that is, until that fateful day when he saw the Lord approaching, slowly walking across the misty water. He rubbed his sleepy eyes, unsure if this was a vision, or perhaps, a dream.
Now Jesus reached his arms out to Peter, calling him to come close. Filled with fear, Peter called out, "Depart from me, Lord! I am a sinful man!" But Jesus came even closer, close enough so that Peter could hear him reply, "Peter, your sin can't keep me away from you. I love you with your sin, and I want to help you to leave it behind."
And Peter took courage from those words, he pulled his coat tightly around his shoulders, and stepped out of the boat, towards the Lord. At first he faltered, unable to believe that he could really do this, really walk across the lake. He looked down, only for a moment, but that was all it took to shake his faith and he began to sink. "Eyes on me!" Jesus called out. "Keep looking to me, Peter, I am all you need for strength, to stay above the waves of doubt," and he reached out his hand to pull Peter to the surface once again.
Peter would never again return to the boat that had been his abode and his life-source. With his eyes forever looking to the Lord, his horizon became wider than ever before, filled with love, joy and peace that could not be found in his solitude on the water; that could only be found in the companionship of Jesus. And the boat remains anchored to that very spot where Peter left it, forever a symbol of our need to leave our past behind in favor of new life in Christ.
I continued my walk, uplifted by the knowledge that God would always find a way to remind me that I, too, like Peter, am called to keep my eyes fixed on Jesus as I step out of my own boat of seclusion and sinfulness and journey to the freedom that only He can provide.
Posted by Anne at 10:25 AM