My parish has a quarterly newsletter for which I write (you're surprised about that, right?) We have been running a Catholic Trivia Series and this is my latest installment. Do you like the title? I thought it was fitting for this blog, and for me because very soon I will be celebrating my 45th birthday and although my bones do audibly creak from time to time, I hope that I won't be looked at as just some old bones from now on! 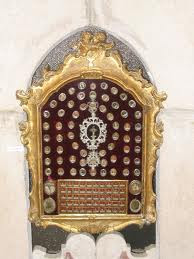 When someone that we love moves away or dies, we long to keep a personal memento of that loved one so that we can look upon it with fond memories and it will become a reminder to pray for that person, and perhaps, to ask that person to pray for us. It’s no different in the Church. When someone who has lived a good and holy life has been elevated to the status of sainthood, we like to have those visual reminders that personal mementos provide to let us know that our beloved saint always remains with us in spirit. This is how relics can come to be a source of support in remembering the saints and in helping us to grow in holiness by turning to them in prayer.

A relic is often a piece of bone, but can also be a piece of clothing or other personal item, that had belonged to a saint and has been preserved and stored in a reliquary, or container specifically meant for holding relics, so that the faithful can venerate or honor that saint as a means to draw us into adoration of God, for whom the saintly person lived their life. The word relic is based on the Latin term “reliquiae” which means “remains.”

The practice of venerating relics is carried out in many world religions including Buddhism, Hinduism and Christianity. The Christian practice of venerating relics dates back to the Old Testament book of Kings: “So Elisha died and they buried him. Now bands of Moabites used to invade the land in the spring of the year. And as a man was being buried, lo, a marauding band was seen and the man was cast into the grave of Elisha; and as soon as the man touched the bones of Elisha, he revived, and stood on his feet.” (2 Kings 13:20-21)

Another very moving example of the use of relics comes from the New Testament where a woman was cured of her hemorrhage just by touching the hem of Jesus’ cloak. She didn’t need to touch the body of Jesus or even to speak to him, but by simply reaching out to the fabric of his clothing in faith, a healing miracle occurred.

Now, today, we can’t really claim that the veneration of the relics of saints will bring about miracles, but it can draw us deeper into the mystery of God and the lives of His saints by spending some time praying over relics and reflecting on the lives of the people that they represent.

Perhaps the first saint whose relics were venerated after the time of Christ was St. Polycarp. According to Catholic Answers, the early Christians who were with him when he was burned at the stake saw to it that his remains were well cared for and they recorded the event with these words: “We took up his bones, which are more valuable than precious stones and finer than refined gold, and laid them in a suitable place, where the Lord will permit us to gather ourselves together, as we are able, in gladness and joy and to celebrate the birthday of his martyrdom.”

There are several different classes of relics. A first class relic is a part of the Saint’s physical body such as a piece of bone or hair and also the instruments of Christ’s passion such as a sliver of wood from the cross. A second-class relic is something owned by the Saint or instruments of torture used against a martyr. A third class relic is something that was touched to a first or second-class relic. It is possible to make a third class relic by touching a first or second-class relic, including the tomb of a Saint, with an object, for example, a rosary or a holy card. When relics are placed inside of churches, they are kept in one of two places: in a space inside of an altar or in a reliquary, a container specifically meant for the storage and veneration of relics.

In some cases, the body of a saint is found to be incorruptible, or without decay, when it is exhumed. In these cases, rather than separating the pieces of bones and sharing them throughout the world, the remains of the body are usually kept whole, possibly covered with wax or silicone for protection and aesthetics. There are many famous saints whose bodies are venerated as incorruptible relics such as St. Catherine Laboure from whom we received the Miraculous Medal of Mary, St. John Vianney, the patron saint of all priests, and St. Bernadette Soubirous who was the visionary at Lourdes, France.

Here in the United States there are only ten saints whose entire bodies are available for veneration. One of these can be found in Galesburg, Illinois. Fr. Jim Kubicki, SJ, the National Director of the Apostleship of Prayer based in Milwaukee, recently paid a visit to Corpus Christi Church in Galesburg, and shares the fascinating story of St. Crescent on his blog, Offer It Up:

“Around 1838 the body of a nine or ten year old boy was discovered during excavations of the catacombs of St. Cyriacus in Rome. He suffered martyrdom at that young age around the end of the third century in the persecution of the emperor Diocletian, one of the fiercest persecutions of the early Church. His name "Cresces" (anglicized to "Crescent") was on the marble slab that covered the tomb and next to the body was an urn in which had been placed the blood of the martyr now dried.

The body of St. Crescent was removed and the Holy Father gave it to Blessed Antonio Rosmini, founder of the Institute of Charity or Rosminians. Father Rosmini had the relic taken to Stresa, Italy, where it was placed under the altar of his chapel. In 1887, Rosminian Father Joseph Costa asked his superiors if he could have the relic for the church he had just built in Galesburg, Illinois. His superiors agreed.

St. Crescent's body was enclosed in a case of thin glass and Fr. Costa worried that it wouldn't make the long trip to the U.S. without being damaged. He expressed his concern to his superiors, one of whom told him: "St. Crescent will take care of himself, and you too!" And so it happened. The relic survived intact on the railroad trips through Italy, France, England, and from New York to Galesburg, but what was more remarkable was his ocean passage. Fr. Costa planned on crossing the Atlantic on a ship called "Alesia." Either because he suddenly changed his mind or because he missed the departure time, Fr. Costa and St. Cresent missed the boat. But the "Alesia" never completed the voyage; it mysteriously disappeared. Fr. Costa along with St. Crescent, having boarded a different ship, arrived safely.

You can see the body of St. Crescent in a glass case on the right side of Corpus Christi church. The bones are covered with wax except for two wounds through which you can see an arm bone and the skull. You can also see the teeth of the martyr through his partially opened mouth.”