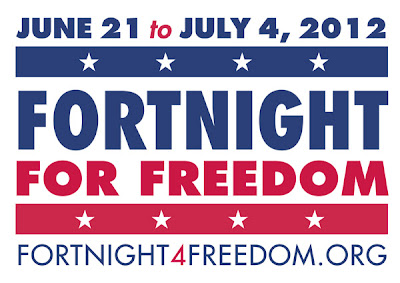 The Archdiocese of Milwaukee is offering many special Fortnight for Freedom events where the faithful can gather to pray for our religious freedom during these times that try the soul.  Last weekend Archbishop Listecki offered a special Mass where he courageously proclaimed that we will not obey the government in following the health care mandate that refuses to allow us as Catholics the freedom to follow our consciences. He told us to "proudly puff out our chests and live our Catholic faith, not only inside of our church buildings, but freely in the public sector as well.  We are always Catholic, everywhere, not only when we are inside of a church, and we should always live our faith in all that we do.  We will not let the government try to redefine what it means to be a Catholic!"  His words had a profound effect on me and I everyong at Mass and we left the church with our heads held high. 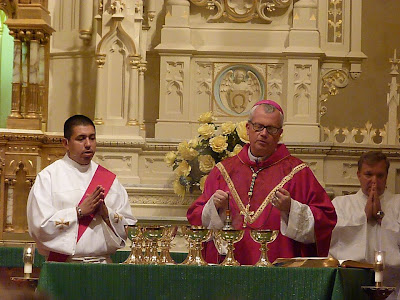 On the Vigil of the Feasts of St. Peter and St. Paul, Bishop Hying presided at a special rosary and Mass for a full church of faithful Catholics at Holy Angels Parish in West Bend, Wisconsin.  (Photo courtesy of and copyrighted by Eve Anna Urlackis.)  His words resonated deep within this Catholic heart.  He began his homily with a question: "What is it about the Church that is so threatening?  The answer comes in examining the life of Christ.  Jesus raises the most fear in others when he speaks of himself as the Messiah, because if Jesus is Lord, then no one else can be.   We proclaim that Jesus is Lord and if this is true then no civil leader can claim that title for himself."

He went on:  "There is a hidden grace in this current struggle to fight for our religious freedom.  Sometimes we have to make a choice and if we are faithful, the choice has to be for Him and for Her.  We are called to witness to our faith, not in a strident way, but rather, in a way that is serene but bold, convicted and courageous, loving and truthful."

Holding up St. John Fisher and St. Thomas More as examples of fidelity to the faith under tyrannical persecution by the government, he encouraged us to to follow their example in always putting God first in every situation.  He said, "St. Thomas More's daughter begged him to just sign the paper that would save his life even though it meant that he would have to deny his beliefs to do so.  She told him that he wouldn't have to mean it when he signed, that he could cross his fingers behind his back.  But his conscience would not allow him to do it.  And as he was led to his execution he said, "I die the King's good servant and God's first."

In light of the gospel passage  for the vigil of St. Peter and St. Paul (John 21:15-19) he explained:  "The crux of what it means to be a follower of Christ is found in reflecting upon the Greek definitions for love: Philia is the love of one friend for another, Eros is the love between husband and wife, and Agape is the love that Christ shows on the cross.

When Jesus asked "Simon, do you love me?"  it was the Agape love that He was asking for.  Yet Simon responded with Philia love, as in "Jesus, You know we're good friends."  But when Simon was crucified he recalled this moment with Christ, and it was then that he finally got it.  When he was hanging upside down it was the first time that he saw everything right side up.  He was finally willing to lay down anything and everything for Christ.

Do we want to live the Agape of love or do we just want to say, "Jesus, we're good friends?"

As he concluded his homily the hearts of everyone in the church were stirred and convicted by his words.  While the altar was prepared for the consecration, the church swelled with voices filled with love for Church and love for country as we sang "Faith of Our Fathers, holy faith, we will be true to thee til death."


Catholic Church does not conform to society

In his column "Catholic reformers may be out of luck," Bill Keller lamented the resistance of the Catholic Church toward the changing of her teachings (Crossroads, June 24). Such a stance reveals a fundamental misunderstanding of the church's nature and identity.

The Catholic Church understands herself to be both a mystery and a sacrament, born from the wounded side of the crucified Christ, guided by the Holy Spirit. We do not generate the truths that we teach; they come to us as a revelation from God, mediated through the Scriptures and tradition. Keller seems to view the church as a political party that simply needs to rework its platform in order to stay current with contemporary culture.

Such vastly different starting points will never easily converge. The beauty, truth and goodness of Catholicism speak for themselves. One could only leave the church through ceasing to believe her teachings or not understanding them. May all of us be genuinely guided by the Holy Spirit.