An Honor to be Catholic (or Here Comes Everybody)


I've been feeling a bit out of sorts in my faith of late.  I've always been very turned off by Catholics who publicly push their agenda for married or women priests or anything that is outside of the official teaching of the Church upon the rest of us Catholics.  And lately, I've begun to feel equally turned off by Catholics who publicly criticize the Pope and who push for only Latin Mass and only male altar servers, and a smaller, purer Church etc.  It's a big Church and we all belong, liberal, conservative and everyone in-between, and yet, it seems to me that we can't seem to stand each other.  Where is the love, I wonder?  Why can't we stop being so pushy?  Why can't we stop being so mean-spirited and small-minded?  Is this what Catholicism is really all about?  Must we constantly fight and criticize and trample upon each other in our efforts to be right and to prove everyone who doesn't agree with us to be wrong?

This dilemma, the constant clash between liberal and conservative Catholics, and people who label themselves as such, instead of simply calling themselves Catholic, and acting in a loving manner toward all, has made for a difficult Lent for me and there were many times when I found myself wondering whether I really belong anywhere in this Church, not really feeling particularly liberal or conservative myself but just loving God with all my heart and desperately wanting to draw closer and closer to Him each and every day.

And then the glorious day of the Easter Vigil arrived.  I had been asked to substitute for a lector and extraordinary minister of the Eucharist at this Mass.  I have been a lector for many years and feel quite comfortable proclaiming God's Word, but I've only served as an extraordinary minister of the Eucharist on a few occasions and I have never felt comfortable or worthy enough to offer the very Flesh and Blood of the Lord to others.  But, always wanting to model myself after the Blessed Mother, I said "yes" despite my reservations.

I was so nervous on the day of the Vigil that I actually had asked two different people to take my place and was tempted to ask two others, as well, in an attempt to back out of my promise to help.  NOT like the Blessed Mother at all!  Can you imagine her saying, "Uh, God?  I changed my mind about this whole Mother of Christ thing.  I'm too nervous and unworthy to go through with it.  Can you find someone else?"  Thank God she is so much stronger and braver than I!  But, God's plan for me was clearly to have me follow through on my promise, as those I had actually asked to take my place weren't able to accommodate me.

First in line was the woman who was just baptized at the Easter Vigil, followed by the four adults who were received into the Church.  To offer the Blood of Christ to them for their very First Holy Communion, was incredibly touching!  Later, my own family members each bowed to the Lord's Blood and then uttered their "Amen's" as I offered them His Blood to drink.  This was an Easter I will never forget!  This was an Easter where I felt exceptionally proud and honored and moved to be Catholic!

Later, as I spoke with two of the newly received, a married couple, they shared a bit of their story with me about how they had long considered Catholicism and studied it from an intellectual viewpoint before finally committing to it.  Through their story, I realized that even though our Church may look ugly and dismal to those on the inside from time to time, to those on the outside looking in, we are a beautiful Church full of mystery and goodness and the Love of God, sinful and messy and full of complainers though we are.  I feel more blessed and proud than ever to call myself a Catholic and I wouldn't give up the beautiful gift of my Catholic faith for anything in the world! 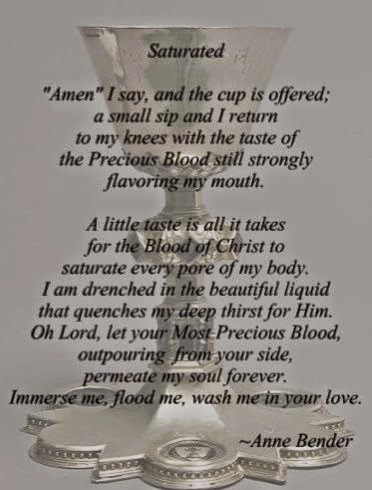