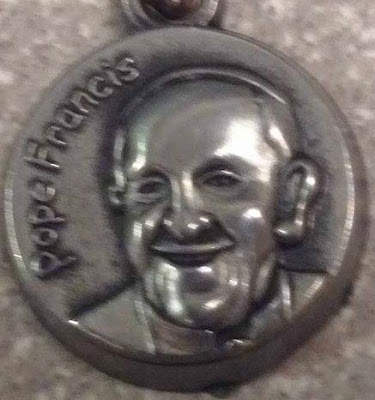 I'm still sifting through memories and moments of the big Philly trip to see Pope Francis last September, and I'm still marveling over the monumentalness of it all; the fact that I took a fifteen hour bus ride anywhere, the fact that the city of Philadelphia was so unexpectedly fascinating, and the fact that I was on the same street as Pope Francis all astound me.

Considering how much I love and admire Pope Francis I should really just be marveling about the fact that I'm on the same planet that he is on, shouldn't I?  He has so much to teach us about love and kindness and mercy and God and yet we seem to spend so much time arguing about what he says and what he means.  We just don't understand him, do we?  Sort of like those Pharisees who argued with and questioned Jesus every time he spoke.  Truthfully, I have to admit that sometimes when I read the words of Jesus, I don't understand Him, either.  I mean, why did He say that He came to bring division? What's that about?  Doesn't scripture say that "He shall be peace"?  It's just too confusing for me to wrap my head around the whole concept.

But back to Pope Francis in Philly-I'm sure it's no secret that I'm a nerd for all things Catholic, so I was thrilled to learn that a piece of carpeting upon which Pope Francis walked while saying Mass in Philadelphia could be had for the cost of a donation to St. Jude Children's Research Hospital.  What a unique memento!  I dashed off an email to Flemington Department Store in New Jersey lickety-split, sent in a donation to St. Jude's, and within a few days was proudly admiring my future second-class relic of a future saint.  Now I just need to have it blessed! 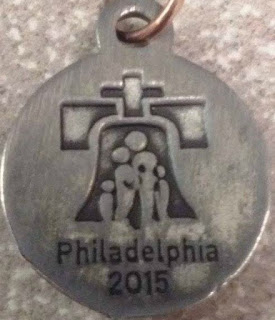