The National Shrine of St. John Neumann in Philadelphia 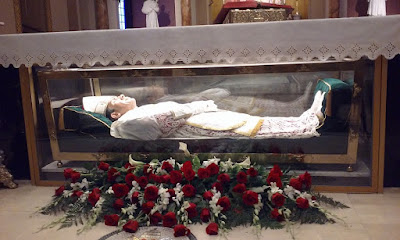 "How much I love You, O my Jesus.  I wish to love You with my whole heart; yet I do not love You enough.  My lack of devotion and my sloth make me anxious.  I have one desire, that of being near You in the Blessed Sacrament.  You are the sweet bridegroom of my soul.  My Jesus, my love, my all, gladly would I endure hunger, thirst, heat and cold to remain always with You in the Blessed Sacrament.  Would that in Your Eucharistic presence I might unceasingly weep over my sins.  Take entire possession of me.  To You I consecrate all the powers of my soul and body, my whole being.  Would that I could infuse into all hearts a burning love for You.  What great glory would be given to You here on earth, if every heart were an altar on which every human will were laid in perfect conformity with Your will to be consumed by the fire of Your love."
~Adapted from the diary of St. John Neumann 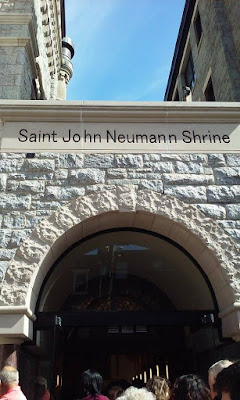 Beneath the altar of the lower church of St. Peter's Church in Philadelphia lies the incorrupt body of St. John Neumann at what has now come to be known as the National Shrine of St. John Neumann. St. John Neumann, a Redemptorist priest and bishop of Philadelphia, died of a stroke on the city streets at the age of 48 while running errands.  It had been his wish to be buried in the crypt at St. Peter's Church which was managed by the Redemptorist order.  Following his death, many faithful people came to pray at his tomb and many miracles have been attributed to his intercession.  After being declared "Blessed" in 1963, his remains were exhumed and found to be incorrupt.  They were placed in a glass encasement in the newly built lower church, the building of which was necessitated by the throngs of pilgrims who came to pray at his gravesite.   He was canonized a saint in 1977 by Pope Paul VI.

While on pilgrimage in Philadelphia to see Pope Francis, we were blessed to visit the National Shrine of St. John Neumann.  We had an opportunity to be blessed with the relics of St. John Neumann, to pray before his incorrupt body and to tour the breathtaking upper church.  Bishop Hying, who told us that visiting the shrine had been on his bucket list, shared a bit of St. John Neumann's life story with us.

St. John Neumann was born in 1811 in what is now the Czech Republic and studied for the priesthood but was denied ordination due to a glut of priests.  He came to America in 1836 and was ordained in New York.  Lonely in his travels, he joined the Redemptorists in 1842 to become part of a community.  He was appointed Bishop of Philadelphia in 1852.

He is well-known for his tireless efforts in service of the faithful immigrants of America.  He knew six languages, started the first Diocesan Catholic School System, founded several religious orders of sisters,  built new churches at the rate of one each month, and tirelessly traveled throughout Northeast America.   He was often teased about his short stature.  He was so short, in fact, that his feet didn't reach the stirrups of his horse which must have made all of the traveling that he did all the more difficult.

Of all of the places that we visited and all of the sights we witnessed in Philadelphia, I was most deeply moved here at the National Shrine of St. John Neumann.  To kneel before the incorrupt body of a saint who shares my Czech ancestry, to be blessed with his relics, to view his disciplinary measures, to hear his life story-all of this made St. John Neumann come to life for me and I will forever after consider him to be one of my favorite saints.

The stained glass windows told the story of his life: 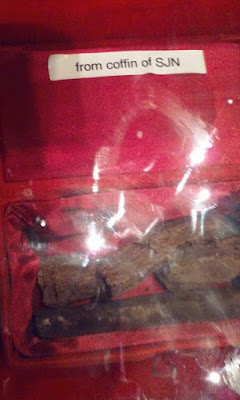 Prayer for the intercession of St. John Neumann

O Saint John Neumann, your ardent desire of bringing all souls to Christ impelled you to leave home and country; teach us to live worthily in the spirit of our Baptism which makes us all children of the one Heavenly Father and brothers of Jesus Christ, the first-born of the family of God.

Obtain for us that complete dedication in the service of the needy, the weak, the afflicted and the abandoned which so characterized your life. Help us to walk perseveringly in the difficult and, at times, painful paths of duty, strengthened by the Body and Blood of our Redeemer and under the watchful protection of Mary our Mother.

May death still find us on the sure road to our Father's house with the light of living Faith in our hearts. Amen.
Posted by Anne at 3:37 PM