Ponderings on the Priesthood 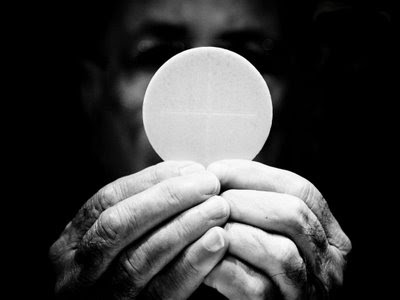 While I was still in the hospital after the birth of my fourth son, a woman from church came to give me communion and as she left my room after feeding me the Body of Our Lord, she carelessly said, "Poor thing! Four sons! One day they will all get married and leave you!" I was left a bit dumbfounded, but not enough to leave me without a retort so I shot back, "Who knows? Maybe they'll all become priests and leave me anyway!"

So when my oldest son, while still at the tender age of ten, announced that he felt called to the priesthood, I was pleased and carefully nurtured his prayer life along, being cautious not to push and doing my best to always let him know that no matter what path he would eventually follow in life, he would always be loved for who he is, my beloved son and God's beloved son, not for what he does with his life.

Now he is actually in the process of applying to the seminary and it feels as though my world has turned upside down. Now why should it feel that way? It's not my vocation, not my life, but still I'd be untruthful if I said that I wasn't a bit unnerved and stressed right along with him as he fills out the application forms and keeps his appointments with doctors, dentists, psychologists and priests for the necessary interviews and poking and prodding required of all applicants to the priesthood.

I can't help but feel overwhelmed by the entire process, by the thought of my oldest son soon to be packing up and leaving home for college of any sort and the worry that it is very possible that his hopes and dreams won't come true and that he won't be accepted to the seminary. I'm challenged by how difficult it is to listen to his worries and his stresses and to not take them as my own.

On New Year's Eve for the Solemnity of Mary, Mother of God, my family and I attended a nearby church that offered an 11:00 PM Mass sponsored by the Rosary Evangelization Apostolate and celebrated by our friend, and family member in our hearts, Fr. Matthew Widder. Fr. Matthew had asked John if he would help as an Extraordinary Minister of Holy Communion. John has never participated in this ministry before and watching him offer the Body of Christ to those at Mass, including me, for the very first time, really took my breath away. It was as if I was seeing a vision of his possible future, holding the Body of our Lord in his hands and offering Him to others and my heart felt torn by the mix of sorrow mingled with joy with which it was filled. And then I recalled the following passage from Caryll Houselander's Passion of the Infant Christ:

"A young priest was celebrating his first Mass. In the front of the church his mother and his young brothers knelt. It was easy to know them by their likeness to him-a family of dark, golden-skinned boys, and the mother like them.

When the Mass was ended, and the new priest came back into the sanctuary for the blessing and the kissing of the consecrated hands, the family hesitated shyly, almost paralyzed by wonder and love; and before they could go first (as they should have done) to the altar rails, the crowd had pushed past them, strangers had taken their place. The faithful were flocking around their new shepherd, and his mother and his brothers had become part of the crowd, waiting their turn until the end.

For one moment the young priest looked over the bowed heads into his mother's eyes, and his face shone.

"My mother and my brethren are they who hear the word of God and do it."

Because the priesthood had made him the Christ of the people, he belonged to them; he was their kith and kin, their son and brother, their Christ, their priest at the altar.

People often seem to think of our Lady aggrieved, slighted when this happened to her! I think she and her son looked across the heads of the crowds to one another with just that understanding and gratitude that shone on the faces of the young priest and his mother."

And so I pray that if John will be accepted to the seminary and will prepare for priesthood, that my heart will be as open as that of the Blessed Mother and the mother in this story, that I will understand that this offering up of my son for the good of others is the greatest blessing a mother could ever know. Please hold John in your prayers as he continues this process of discernment and application. And for some really good reading about a mother's hopes for her son, I encourage you to visit the Archdiocese of Milwaukee blog where one of my favorite local writers, Karen Mahoney, courageously shares her hopes for her son, Erin.
Posted by Anne at 5:19 AM