Open Up the Roof

"Unable to get near Jesus because of the crowd, they opened up the roof above him." ~Mark 2:4 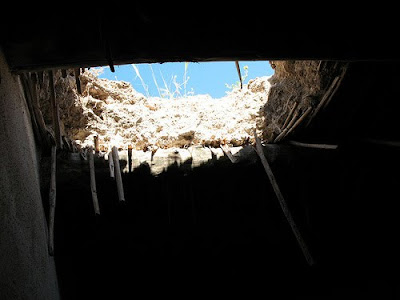 Each day as I spend a few early morning moments in prayer with the daily readings before I attend Mass, I pick out one line to reflect upon throughout the day. Some days that line becomes more meaningful to me than others and the words of scripture with which I have prayed come back frequently as a gentle reminder of God's presence in my life. Yesterday's gospel reading from Mark contained one line, "open up the roof" that seemed to make a particular impact upon me.

My weekends are usually unbelievably busy and this weekend in particular was exceptionally packed with activity. Within our family schedule we had seven basketball games which included my required 8 volunteer hours in the concession stand all to be managed around the weekend work schedules of my husband and I and our three oldest sons and our son Justin's Confirmation retreat, a funeral,a birthday party and the seasonal chore of snow removal. Sometimes it is really difficult to get everyone where they need to be when we are scattered into so many places at once and even with four drivers in the house we still only have two cars so our busy weekends end up being a combination of divide/carpool/conquer!

And somehow, in the midst of all that chaos, I was able to open my roof and allow God to find his way in and to make a profound impact on my life.

On Friday afternoon I raced from work to the funeral of Pat Jakus, a friend of mine from Roses for Our Lady. Pat was such a beautifully holy and energetic woman who always gave her all for God and even the way she died was a testimony to the joys that God offers to those who love Him. Pat was a lector at her parish and last week while offering her service as a lector during a funeral Mass at her parish, she proclaimed this beautiful passage:

"For I am convinced that neither death nor life, neither angels nor demons, neither the present nor the future, nor any powers, neither height nor depth, nor anything else in all creation, will be able to separate us from the love of God that is in Christ Jesus our Lord." ~Romans 8:38

Then she looked over to the priest, offered a big smile, and as she proceeded to climb the steps to the choir loft she suddenly felt tired and out of breath. She sat on the bottom step, rested her head against the wall and died while the choir was singing "Alleluia."

What a beautiful way for Pat, or for anyone, to die! Clearly Pat lived her life with her roof wide open and so even in her death it was easy for Jesus to find His way into her heart.

Later that night, with thoughts of Pat and the funeral still working through my mind and heart, I was serving up hot dogs and popcorn at my son Jack's basketball game while two teams were battling it out on the court. The sounds of shoes squeaking, fans cheering and coaches calling out plays were ringing through the air. The plays that the coaches call are usually the names of college basketball teams, but at one point I was sure I heard a coach call out "God's will!" Maybe it was just my over-tired imagination having it's way with me at the end of a long day but I thought whether or not that was actually what the coach said, "God's will" would be the perfect name of a play for shouldn't we all plan out every action of our lives with God's will as the ultimate playbook behind our movements? And so the words that I imagined the coach to say became a reminder to me to keep my roof open at all times to allow the will of God to reach me.

I was feeling a bit of sorrow that I wasn't able to convince my boss to let me have Saturday morning off from work because there was a big pro-life rally planned in our Archdiocese and I had really wanted to attend, as if I didn't already have enough going on this weekend! So when I awoke on Saturday morning and opened my email, I found a message from our local 40 Days for Life leader inviting early arrivals to come pray at the abortion mill as there was word that a 14 year-old-girl might be coming for an abortion today. I wanted to open my roof and respond.

My oldest son John was my designated car-pool ride to work, so he and I left home early so that we could spend some time praying at the abortion mill before I would have to leave for work. We arrived at the abortuary at 7:15 AM dressed for the arctic tundra as the temperature was only 16 degrees outside. (Hard to believe that it had been an unseasonably 60 degrees just a few days before!) When we arrived we were the only ones at the clinic but we were soon joined by a woman and three men holding signs. Just before we left, three clinic employees arrived ready to begin the work of death. All morning while at work, my heart remained in those frigid temperatures outside the abortion clinic praying for that young, pregnant girl and all of those affected by abortion including those three employees who seemed so cheerful about beginning their work day. And I prayed, "Dear God, open the roof of the hearts of the abortion mill employees and those seeking an abortion to allow the light of Your love and truth to enter in!"

It seems so strange to consider the differing locations of a beautiful funeral, a rowdy basketball game and a desolate place of death as places where God's will can be heard and acted upon equally and yet this weekend I found it to be very true that it really doesn't matter where we are or what we are doing, if there is joy and love in our hearts and a desire to please the Lord, He will always have His way with us and it is His will that will be accomplished in all things and all ways if we only open our roofs to allow it.
Posted by Anne at 6:21 AM