"The glory of friendship is not the outstretched hand, nor the kindly smile nor the joy of companionship; it is the spiritual inspiration that comes to one when he discovers that someone else believes in him and is willing to trust him."
~Ralph Waldo Emerson 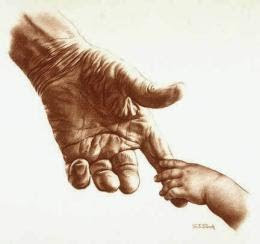 My 16-year-old son Justin and I recently had a meeting with his high school guidance counselor to help plan out his future career goals. She greeted us with this thought: "Your generation is expected to have a maximum life span of 123 years and you won't retire until you are 75 so you better plan your future wisely." No, I didn't mistype that, she really did say 123 years. Scary stuff! I was thinking that the average life expectancy of 80 years of exile on earth before going home to our God is a bit much, especially if those later years are marked by poor health and dependence upon others, but 123 years is just pushing the buttons a bit, isn't it?

Her scare tactic didn't impress Justin, though. His mind is made up that he wants to work with his hands and right now the thought of working as an auto technician until he is 75 is appealing to him quite a bit. (Fabulous, I say! Wouldn't it be wonderful to have an auto mechanic in the family?)

But her statement made me ponder a little more seriously about this thing called life. In my world where I spend my work days surrounded by pregnant women swollen with the cusp of new life, newborn babies blinking at the bright lights of their emerging world, pudgy six-month old babes all smiles and laughter, and tired toddlers carrying on with tempestuous meltdowns over the fear of being measured and weighed, life is vibrant and full of energy. Every experience is a first and the excitement of newness is just around every corner.

But looking ahead at 123 years of firsts, seconds and more, and the staleness of "been there, done that" becomes the name of the game. How can humanity expect to keep the freshness of new life experiences going after 123 years or so? My thought is that the only way to keep a human being actively engaged in the workings of this world with a joyful spirit is through the companionship of other lives, through the blessing of a loving friend.

The Lord had graciously blessed me with an abundance of beautiful friends, those in whom I can confide and those who feel that I am a safe person with whom to share their soul stories as well. But among my many friends there is one with whom I share the longest history and she is now, and has always been, very special to me.

Judy and I met 25 years ago in a technical college sociology class. We must have misunderstood the name and purpose of the class because we did more socializing there than learning about sociology and we became fast and forever friends. Judy was studying police science and I was there working toward a degree in dietetics. We are about as different as two women could be-Judy, strikingly beautiful inside and out, is married to another wonderful police officer and the two of them are childless; I'm married to a another foodie (Paul is a chef) and our marriage is blessed with an abundance of children (or as Vicki, another one of Judy's friends would teasingly ask "How's Anne and her 18 kids?) Judy takes multiple vacations to Las Vegas but if I could go anywhere in this world my heart would call me to Rome. Judy and I both grew up in large and faith-filled families but she is Lutheran, and of course, you know, I'm Catholic. Judy is funny, smart, loving, outgoing and energetic, a real joy to be around and a great blessing in my life.

When Judy and I first met we were wild young girls who spent a great deal of time out partying at the bars, drinking and dancing until all hours. To this day I cannot hear You Dropped a Bomb On Me, Baby by the Gap Band without smiling at the remembrance of those fun nights out dancing with Judy. We've certainly both mellowed with time and now only get together about once or twice a year for dinner and a single drink.

It's Judy who has kept our friendship alive over the years as I am terrible about keeping in contact-rarely calling or writing. It's always Judy who remembers every birthday, anniversary and special occasion. It's Judy who extends compassion in hard times, not only to me but to her large network of close friends, many of whom she has remained close to since she was in high school. It's Judy who has a deep understanding about the importance of enduring friendship in this often lonely world.

Judy certainly has a knack for making and keeping friends. She can start a conversation with a stranger about some ordinary topic like the weather and make an instant friend. Everywhere we have gone together for as long as I've known her she runs into someone she knows, and everyone she knows loves her forever. She once invited the entire group of people who were working out at her fitness club one morning to join her for a game of bowling that night. Forty strangers showed up to bowl with Judy.

Last night Judy and I got together for dinner and a drink (my favorite-a mojito) at a cute little Mexican restaurant. I told her about the meeting with Justin's guidance counselor and her warning about the life expectancy of this generation of teens. "Is she crazy," she asked, "Sixty years is too long for me!" But by the time we parted with an embrace at the end of the night we had both agreed that living to be 123 years old would be a joy as long as we remained in each others lives.

And I looked back into the restaurant as we walked away and saw a picture of Our Lady of Guadalupe that I didn't notice when I had arrived. I smiled at the certainty that even the Blessed Mother would agree that a faithful friend is the greatest gift that God has bestowed upon the lives of His children, whether those lives are short-lived lasting only 60 years, or enduring for the long-haul of 123 years on this earth.
Posted by Anne at 2:05 PM