"They were utterly amazed at what he taught, because his message was spoken with authority." ~Luke 4:32 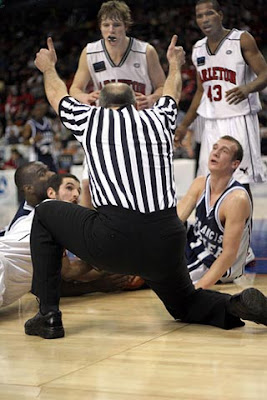 My family spends a great deal of time watching middle school and high school basketball this time of year as several of the Bender children play for the school and our church and the ones who aren't playing enjoying cheering on the sidelines during their sibling's games.

With all of the games that we watch, it's no surprise that we have become fond of several referees who have an especially good eye during the game, making expert calls and keeping joyful attitudes despite the stress of keeping players, coaches and fans happy.

My very favorite ref is a big, burly, older man who is all stomach and smiles. He not only refs the games, but he practically coaches them as well, giving the players tips on skills that will improve their games and reminding them to bend their knees when they are at the free-throw line. When he blows his whistle and makes a call he puts his whole body into it, slapping his arm to show exactly where the foul occurred and and motioning with his arms as well as with his feet to show traveling and double-dribble calls. He clearly puts his entire self into his work. I love a ref that entertains like this particular man does; he makes watching multiple and repetitive basketball games quite enjoyable.

So at one of my daughter's recent games where he was the ref, I couldn't help but recall last Sunday's gospel reading where it was noted that Jesus spoke with authority. This ref, too, spoke with authority and everyone present at the game payed close attention to his words and willingly abided by his calls without complaint. When I mentioned this to my husband and sons who were watching the game with me their collective groans were almost louder than the sounds of the game, for they have heard my reflective gospel musings far too often at events where most people would be hard put to find the presence of God. One of my sons was quick to call a foul on me by complaining, "Mom! This is a basketball game, it is not Church!"

But still, how could I not make the comparison to Christ? For in this ref's words and actions it was so easy to notice a holy presence. He clearly spread the gospel messages of kindness, joy and diligence through his words and actions. And couldn't we all take a tip of the ball from a ref who speaks with such authority? Shouldn't we all strive for the goal of making every word and action in our lives bring a little more of the authority of the word of Christ to life for those who are in our presence? And if we work hard and are successful at accomplishing this feat in the world, then when the day arrives when we meet the ultimate scorekeeper in heaven we can proudly say with St. Paul, "I have fought the good fight, I have finished the race, I have kept the faith." ~2 Timothy 4:7
Posted by Anne at 5:38 PM