"Our Father, who art in heaven, hallowed be thy name." That is just like a line of music. I'm glad you thought of making me learn this, Miss Cuthbert."  ~from Anne of Green Gables by Lucy Maud Montgomery

"What if this cursed hand
Were thicker than itself with brother’s blood,
Is there not rain enough in the sweet heavens
To wash it white as snow? Whereto serves mercy
But to confront the visage of offence?"
~from Macbeth by William Shakespeare 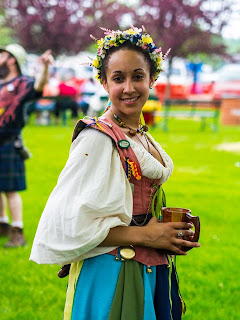 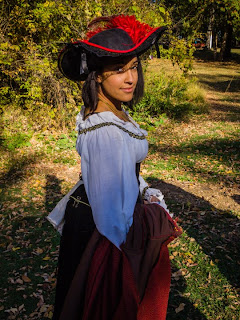 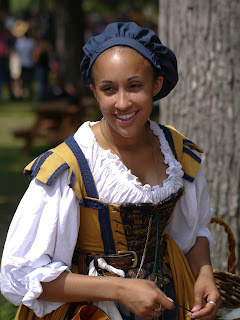 My family and I spent a recent day there and when we first arrived, Elizabeth greeted us at the gate.  It was strange to listen to her speak with an olde English accent, and not once did she step out of character as she quickly showed us around before she began her official role for the day.  She spoke to us of the "year past" and thanked us with a "gramercy".  With each noble character that we passed, she bowed to show them reverence.  It was enchanting!

By far, my favorite show was the informal gathering of actors who recited lines from Shakespeare.  Their passion for their lines was evident and I was often moved to tears with goosebumps crawling up my arms despite the warm weather as I watched and listened.

I couldn't help but wonder what it would be like if we were to put as much feeling into our prayer as the actors did into reciting Shakespeare.  After all, aren't words of scripture and prayer filled with passion and poetry?  Imagine taking each line of the Lord's Prayer step by step and slowly, thoughtfully, praying the words with feeling, instead of rushing through as we so often do.  To pray the prayer to St. Michael the Archangel and shout out with head raised to the heavens "May God rebuke him!" instead of mumbling it with head bent down into our chest, how much more meaning would our prayer have.  And wouldn't our prayer become fraught with emotion if we were to fall to our knees as a pregnant Elizabeth beholding our Fair Cousin as we pray the Hail Mary?

I vow to make all of my ordinary prayer into Renaissance Prayer and to offer God my heartfelt fervor and passion along with my words of petition and praise.  No fancy costume or olde English accent required, but a heart full of reverent love and devotion to my Savior will suffice!
Posted by Anne at 6:09 AM