Starting the Day with Sunshine 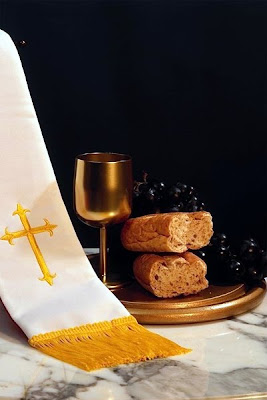 I can't think of a better way to start the day than by attending daily Mass. Receiving the precious Body and Blood of my Lord and carrying Him within me marks my day as Sacred and Holy. There are very few things that could improve upon this blessed beginning, and lately I have been graced to witness and participate in a tremendous improvement that lifts my spirits sky high.

My eleven-year-old son, Jack, has volunteered to serve at the 7 AM Mass every Wednesday during the summer months. Usually, one of our elderly parishioners serves at the daily Mass, so it is a real treat to see a sweet boy at the altar next to Father. In fact, it is such a treat, that one of our elderly parishioners, Mrs. A, who usually attends daily Mass every day except Wednesday, has begun to come on Wednesdays as well, just for the joy of watching Jack serve. She recently sent me an email to praise Jack and his beautiful smile that never ends the entire time he is serving. Mrs. A says that she greatly admires Jack's sincerity as he assists the priest during Holy Mass.

As if watching Jack serve at Mass isn't joyful enough, our newly ordained transitional Deacon Christopher Klusman has also been assisting at some of the daily Masses. Like Jack, he has a smile that never ends. Listening to him proclaim the Gospel and preach a homily is like watching a living miracle each time he opens his mouth, as the fact that Christopher is deaf would hardly be noticeable to one who wasn't in the know.

This morning, my fourteen-year-old son, Joe, attended Mass with me. Before you jump to too many conclusions thinking what a wonderful and holy teen he is for attending daily Mass when he could be sleeping in as most teens do in the summertime, you should know that the only reason he came along was because he had a basketball camp at eight o'clock and if he wanted a ride there, he had to come to daily Mass with me first. (But secretly, I do believe a wonderful and holy teen is alive in his spirit just waiting to be released, no matter how hard he may try to disguise it!)

As Mass was beginning, Joe leaned over to me and whispered, "Mom, I think we're all going to be blind by the end of this Mass." When I questioned him on this theory, his response was that the brightness of Jack's and Deacon Christopher's never ending smiles would light up the church so much that we would all be covering our eyes as if we were standing out in the bright sunshine! And truly, he was right, because it is impossible to watch those two holy young men without smiling as well. By the time Mass was over, we might not have been blind, but everyone in our church was certainly smiling!

Please keep Jack in your prayers as he continues to serve at Wednesday Masses and weekend Masses and discerns whether or not God is calling him to the priesthood. Please pray for Deacon Christopher as well, as he finishes his last year in the Seminary in preparation for ordination to the priesthood next May.
Posted by Anne at 8:46 AM