In January of 2013 I wrote a blog post on the Seven Most Beautiful Churches in Milwaukee.  I know I missed a few in that list and that there are many more beautiful churches that I have not yet seen and don't know about, but now I can add St. Michael's Church on 24th and Vliet to that list and make it at least eight beautiful churches, until I have the opportunity to visit others.

Although we are parishioners at Old St. Mary Parish, my son Jack was the only teen being confirmed from our parish this year, and several other east and north side parishes had small numbers of confirmands as well, so the celebration was combined and held at St. Michael's Church where seventy-five youth were confirmed by Archbishop Listecki.

Before the Mass began we were given a brief overview of St. Michael's Church which was built by German immigrants and is now home to a multi-cultural community of Laotian, Hmong, Karen, and Spanish members, among others.  The church interior is stunningly magnificent with much of its original beauty left intact, although it did seem as though some modifications and modernizations were made in the sanctuary.

The church was packed with people and excitement.  The music was a mix of both traditional and contemporary which added a joyful atmosphere of prayer during the three-hour-long Mass and celebration of the Sacrament.  Archbishop Listecki likes to speak individually to each confirmand during the celebration and those conversations were not amplified so the singing kept the little ones (and adults) from becoming restless during the long process of Confirmation.  During Jack's conversation with the Archbishop, he shared that he chose to keep his baptismal name, Thomas, as his confirmation name because St. Thomas the Apostle, much like Jack, was strong in faith but short on words, saying only "My Lord and My God" upon coming to believe that Jesus was truly risen.

Jack was well-prepared, excited and eager to receive the Sacrament. We hope and pray that the Holy Spirit will bless his life and guide his every move forever.

(For a fun gift that we hope will help him to remember the anointing he received each time he applies it to his budding facial hair, we gave Jack  Barbatus Catholic Beard Balm in both Chrism and Holy Smokes scents.) 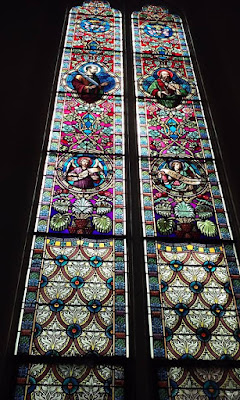