When Fr. Jim Kubicki told us that he would be moving from Milwaukee to South Dakota to work at St. Francis Mission on the Rosebud Indian Reservation, Paul said, "I've always wanted to go to South Dakota!"  So without giving Fr. Jim much time to settle into his new home, Paul, Mary and I took an adventurous road trip in my ancient yet economical Toyota Echo, to pay him a visit.  Fr. Jim showed us the time of our lives, acting as our personal chauffeur and tour guide on an unforgettable three-day whirlwind experience. 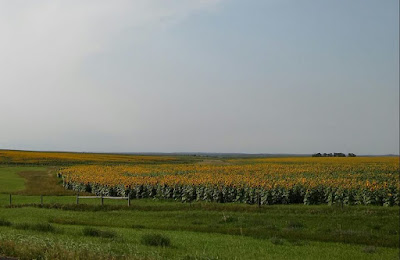 We witnessed an endless expanse of prairies and sky, field after field of sunflowers, more grazing cattle than we could count, and majestic hills and waterfalls.  The natural beauty of this state was something I didn't expect and will forever treasure.

Although we left home for South Dakota very early in the morning, the drive was longer than expected as we made several stops along the way. Finally, after nearly 16 hours, we turned off the interstate onto a long, desolate country road that seemed as though it would never end.  It was a lonely drive as we passed only one or two other cars along the way and the only scenery we passed were fields and fields and fields.  Still, we found that long stretch of road to be somehow very endearing and beautiful in it's endless expanse of plainness.

We were greatly rewarded at the end of the drive as we arrived at Fr. Jim's house and were warmly welcomed and then quickly whisked away to a guest house across from the Mission offices and main church, St. Charles Borromeo, where we worked together with Fr. Jacob Boddicker, SJ and some of Fr. Jim's friends from Minnesota who were also visiting, to make a delicious dinner that turned out to be my favorite of the trip despite having eaten at some fabulous restaurants in Rapid City.  There's just nothing else that can compare to a meal made with family and friends.  I think it's the love that goes into it that makes it so delicious!

The following day our real travels began as Fr. Jim drove us to see the other-worldy Badlands, Magnificent Mount Rushmore, the Minuteman Missile National Historic Site, Needles Highway in Custer State Park where we saw buffalo, fed wild burros and did a little hiking in the majestic Black Hills,  Rapid City, the second largest city in South Dakota which was remarkably clean and beautiful with a statue of a US president on every street corner, Terry Peak, the second highest point in South Dakota, and the historic Wild West town of Deadwood.

In spite of seeing so many natural and man-made wonders in the beautiful state of South Dakota, nothing could compare to the spiritual wonders of daily Mass and learning a little bit about Catholicism from a Native American perspective.  I found that Our Lady of Guadalupe and St. Kateri Tekakwitha are largely beloved and almost everywhere!

The first church we visited, on the night we arrived in South Dakota, was by far the most beautiful and my favorite. St. Charles Borromeo, next to the St. Francis Mission Offices,  was one of three churches in South Dakota that was designated as a Holy Door during the Jubilee Year of Mercy and it will possibly be named a basilica.  Although it's hard to see in my photo as night was beginning to fall under a cloudy sky, the outside of the church is painted lavender, a color chosen by the youth group of the parish. 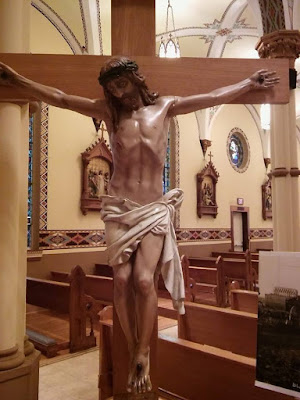 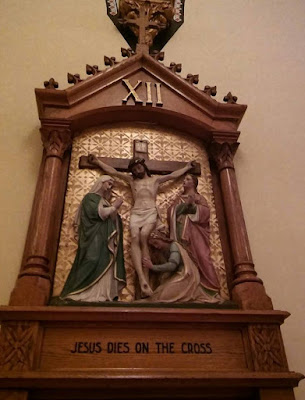 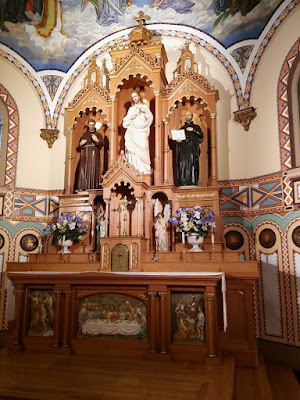 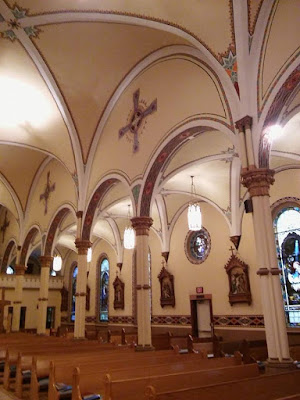 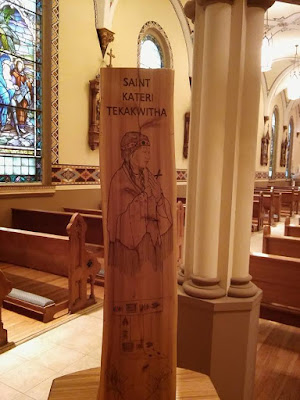 We spent our second night in South Dakota at the Terra Sancta Retreat Center.  We were literally wrapped in prayer while we slept here as the quilts on the beds were handmade and we found a lovely inscription inside one of them.  In the morning we awoke early so we had time to explore the grounds before Fr. Jim arrived for Mass in the chapel.  Although we were surprised to find a sign on the door warning of mountain lions in the area, we were able to pray the outdoor Stations of the Cross and were not at all bothered by wildlife.

The following morning we had a private Mass at St. Isaac Jogues Church in Rapid City with just the four of us.  When we arrived at the church we found a unique holy water font just inside the front door and many Native American touches such as a buffalo hide under the altar and quilts on the wall. Quilts were prominent in many of the churches in South Dakota.

We paid a short visit to the Cathedral of Our Lady of Perpetual Help in Rapid City for a short time of Eucharistic Adoration in Our Lady's Adoration Chapel and a quick tour of the Mother Church of the Diocese.  The Cathedral had also been designated a Holy Door during the Year of Mercy.

A short stop at Wall Drug was required, after all, what trip to South Dakota would be complete without it?  Having been blinded by the bright sun while in the Badlands, Mary and I made a mad dash for sunglasses and we purchased a toy drum for our grandson, Max, but overall found the highly-advertised commercial shopping center to be very underwhelming with one exception, the Traveler's Chapel.  Designed after New Melleray Cistercian Abbey in Iowa, the cool and quiet chapel was a perfect stop for a quick prayer in the midst of so much commercial.  It was a great reminder that God is everywhere, even at Wall Drug!


One of the most fascinating stops of our trip was also one of our very first.  We spent a little time exploring the Buechel Memorial Lakota Museum at St. Francis Mission where we learned about the history of the Native Americans in South Dakota.  The museum was named for Fr. Eugene Buechel, SJ, a German priest who ministered to the Lakota in South Dakota in the early 1900's and began to collect and catalogue many ethnic artifacts and photos which were the origins of the museum. Perhaps the most interesting artifacts displayed were the Winter Counts, documents on which images had been drawn, first on animal hides and later on paper, depicting the major events of each year in the life of the tribe.  The image below is from the public domain and is very similar to what we viewed..

We also learned a little about Nicholas Black Elk whose cause for canonization is underway.  Nicholas Black Elk was a medicine man who spent some time traveling Europe with Buffalo Bill Cody's Wild West Show and was also involved in the battle at Wounded Knee.  After his conversion to Catholicism he spent his time as a catechist and is said to have brought 400 people to Christ.  He used The Two Roads picture depicting the Good Red Road of Jesus and the Black Road of Difficulties to teach the faith.  The picture reminded me a bit of Dante's Divine Comedy.  I could have spent hours studying it.  Upon his death the sky was filled with the lights of the Aurora Borealis, a sign of celebration that this holy man had gone on to his heavenly reward.

The spiritual wonders of South Dakota will remain with me always, inspiring me with the memory of God's natural wonders and beauties, the kindness of all of the people we met, and the stories of holiness among the Native Americans and religious in this vast state of infinite treasures.  But most of all, the memory of my family and I spending time with Fr. Jim, a good and holy friend, and learning about his work with the Lakota on Rosebud Reservation, a community marked by deep poverty yet striving for holiness, will always bring me joy and inspire me to holiness as well.

Prayer for the Canonization of Nicholas Black Elk
Grandfather! Great Spirit! Behold us, who stand before you, singing our song of thanksgiving for your beloved servant, Nicholas Black Elk. Faithfully he walked the Sacred Red Road and generously witnessed the Good News of our Lord, Jesus Christ among Native people. Grandfather, we humbly ask you, to hear the prayers we plead through his intercession. We ask Holy Mother Church to recognize his sanctity, by acknowledging his presence among the company of saints and as one to imitate in his zeal for the Gospel. Open our hearts to also recognize the Risen Christ in other cultures and peoples, to the glory and honor of God the Father. Amen.