"O Lord, we beseech Thee to cleanse the intent of our hearts with the unspeakable gift of Thy grace, that we may perfectly love Thee and worthily praise Thee. Amen." ~Introductory prayer of the ceremony of enrollment as a candidate for the Oblates of the Precious Blood 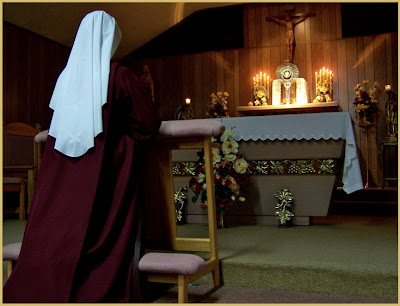 On the morning of my candidacy enrollment for the Oblates of the Precious Blood, I awoke with great joy in my heart and was determined to spiritually prepare myself for the sacred undertaking I was about to embark upon. With a heart warmed by kind messages from friends who encouraged me with their own offerings of prayer, my oldest son and I paid a visit to the local Schoenstatt Shrine to spend some time with the Lord. We were alone in the tiny chapel and together we prayed a rosary for priests in the presence of the tabernacle.

Later, when I arrived at work, the clinic was swamped with clients and I was left with no time to ponder the upcoming ceremony. On my lunch break I slipped away to the nearby Church of the Gesu for confession. An event like this requires a clean soul. As I stepped out of the confessional, I recognized one of the men standing in line as a Conventual Franciscan seminarian from St. Francis de Sales Seminary. I had never met him before so I introduced myself to him and told him that my family and I spend a great deal of time at the seminary and that I had recognized him as one of the seminarians. He introduced himself as Paul Schneider and told me that he anticipated being ordained to the transitional diaconate this coming April. Then he looked at me intently and said, "Pray for me." I confidently told him that I would, but on the inside, I was utterly amazed. This man had never met me before and had no idea that on this very day I would be committing myself to life-long prayer for all priests, seminarians and those discerning the priesthood. I felt as is if his words, "Pray for me" were spoken on behalf of all priests and seminarians and were inspired by Christ himself telling me that my calling to the Oblates of the Precious Blood was indeed a heavenly inspired vocation which was much needed today. I returned to work and all during the busy afternoon I kept recalling those three simple words-pray for me- as I anticipated what was to come.
That evening our living room was arranged into an informal church setting with flowers and candles and a statue of Our Lady of Fatima. Finally, the moment I had been waiting for since last June arrived. My friend Kurt Keidl, who had kindly written a letter of recommendation to the Handmaids of the Precious Blood on my behalf and Fr. Jim Kubicki, SJ, who also had taken the time to write a letter, both arrived and the Mass began. My family joined in the celebration as my son John read the first reading, my daughter Mary read the psalm and my son Jack served as acolyte. Fr. Jim, who had just returned that very afternoon from a two week visit in New Jersey where he led a retreat for a convent of cloistered Carmelite nuns, spoke about his gratitude to cloistered nuns such as the Handmaids of the Precious Blood who pray for priests, and also of his gratitude for lay people who pray for priests. He said that no priest can handle his responsibilities toward the Church alone, that they all need the gift of prayer from others.

Following Holy Communion, Fr. Jim officiated at the short enrollment ceremony which included a reading from the letter of St. Paul to the Ephesians 1:3-10, a questioning of the candidate, a presentation of a medal of Mary, Queen of the Clergy, a prayer of the candidate and a final prayer and blessing.

The Mass and enrollment ceremony were followed by a dinner celebration with a special treat, Holy Spirits Wine, and all too soon the evening came to an end. In the morning, Fr. Jim would be off on another retreat trip for the Apostleship of Prayer, this time to Minnesota. How wonderful it was that he was able to spend his short time at home helping me to dedicate my life to prayer for all priests. It was a gloriously blessed evening and I am filled with joy to prayerfully begin my formation period and to devote my life to prayer for all priests.
Posted by Anne at 11:24 AM