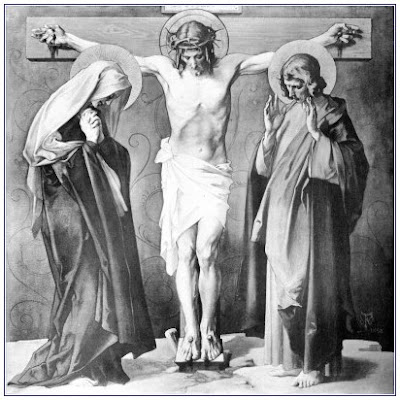 That was the scriptural prayer that I held in my heart on the feast of St. John the Evangelist as I stood for 90 minutes at the bedside of my son, Joe, while he was in recovery from surgery. Joe, whose illness I wrote about briefly in my recent posts, Kneeling in the Manger and Lullaby Revisited, was suffering horrific pain from a large, infected lymph node in his neck that required surgery to drain the infection.

Joe asked to put off the surgery so that he could spend Christmas at home with his family, but on Monday morning, the day after Christmas, Joe came to me as soon as he awoke in the morning and said, "I'm ready. Let's go to the hospital." By Tuesday afternoon at 3 PM, providentially at the Hour of Divine Mercy, Joe was in surgery to have the infected lymph node that was behind his neck muscle drained of the infection that was the source of his suffering. Every surgery has possible complications associated with it and Joe's surgery was no exception, as the lymph node was so swollen and large at about 6 cm. in length, that it was pressing on an artery that led to his brain and it was possible that the artery was also infected.

There are times in your life when you can truly "feel" the prayers of others, and this was one of them. Promises of prayer came soaring in from friends and family and although we were all stressed and worried, my family had never before felt more loved and more protected by God than at any other time we can recall. The morning of the surgery we were visited by two priests who both performed the Sacrament of Anointing of the Sick for Joe, and another priest who came to pray with us after the surgery was over. A quick visit from some dear friends brought cheer just a few hours before the surgery and then, after the surgery began, more friends arrived to keep watch with us and to distract us from our worries with lively conversation during the long 90 minute wait until the surgery was successfully completed and Joe was sent to recovery.

By 4:30 PM, I was allowed to go to Joe's bedside where I remained, standing, for the next 90 minutes until he was recovered enough to return to his room. During those 90minutes, he was continuously given morphine for his pain until he could tolerate it and popsicles to soothe his dry and aching throat. By his third popsicle, Joe was all smiles.

As I stood by his side, I thought about the fact that the surgery occurred on the Feast of St. John the Evangelist and I pictured St. John and the Blessed Mother at the foot of the cross and Jesus telling his mother, "Woman, behold your son." In my heart I knew that He was speaking those words to me now. And I beheld my beautiful, brave and wonderful son suffering the most misery he had ever known, yet I felt peace. On the day of the crucifixion, there was no peace for the Blessed Mother as she listened to the jeers of the taunting crowd and solders while witnessing her Son's suffering in the surroundings of hate. But here, at my son's bedside, as Joe suffered with his own cross, we were only surrounded by love and goodness and it felt as if all of our friends and family who supported and prayed for us were truly living the gospel message, the famous words frequently spoken by St. John the Evangelist, "Love one another."

Joe remains in the hospital until the type of infection can be determined so that the appropriate antibiotic can be prescribed, and although he remains in much pain, he knows that he is loved and that is the best medicine by far! And I thank you, dear reader, for your loving prayers as well!
Posted by Anne at 9:58 AM