My Brother, The Pope-A Book Review 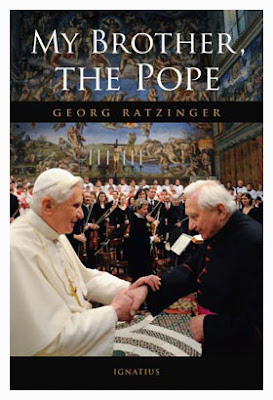 It's hard to believe that our Holy Father is now 85 years old having celebrated his birthday just yesterday! God bless him! It seems that those who are related to our famous religious leaders have been drawn to share their stories of what it was like to grow up with such saintly siblings. Recently Bob Dolan wrote a charming book, Life Lessons, about his brother Timothy Cardinal Dolan and now Georg Ratzinger has come out with My Brother, The Pope which is an equally enchanting and sweet book filled with his tender memories about growing up with Pope Benedict.
The book of memoirs written by the older brother of Pope Benedict opens our eyes to what it was like to grow up in the holy and faith-filled family that produced our current fabulous pope. It is filled with family photos that add vibrancy to the author's words.

I was most impressed to read about how the Ratzinger family suffered through World War II and about the rapid rise of the young priest, Fr. Joseph Ratzinger, into the world of academics and faith. But what touched my heart most deeply were the references to Pope Benedict's love for bears beginning with his early childhood love for a toy teddy bear. It's the type of information that the world just would never learn about if there weren't a sibling willing to share those little life details.

I was deeply struck by Georg Ratzinger's recollections of meals that he personally ate that fondly remained in his heart so much so that he had to include the details in this book of memoirs. It seemed to me to be an unusual sharing of something that was personally significant to the author and it made me smile to think of how food and the sharing of a meal can have such an important place in all of our memories. Nearly every chapter contained a description of a memorable meal which the author enjoyed, such as this passage where he recounted a trip to attend his uncle's funeral after the family had been mistakenly led to believe that their father had died:

"...I accompanied him on that trip to Rickering, his birthplace. That same day, the clergy of the deanery met at the parish in Schwanenkirchen, and I was also invited to attend. "You sit here", they said, and then a wonderful Bavarian snack was served, which I ate with great relish: smoked meat (bacon), bread and butter, and a beer with it. Things like that leave an impression, you do not forget them for the rest of your life! But it all tasted twice as good because I was so relieved that our father was still alive."

I couldn't help but notice the similarities between Georg Ratzinger's frequent recollections of memorable meals and Bob Dolan's oft-mentioned stories of memorable drinks that he shared with his brother, Cardinal Dolan. And this was not the only part of Pope Benedict's and Cardinal Dolan's stories written by their brothers that seemed quite similar...

Throughout Life Lessons, Bob Dolan insists that his brother will never be Pope despite the fact that rumors are nearly always swirling about stating that Cardinal Dolan would make very good Pope material. Could that be because he harbors a fear that if his brother were to become Pope someday, he would lose the close relationship that he has always valued with his brother, that as Pope, Cardinal Dolan would have fewer opportunities to spend time with his family? That certainly seemed to be the concern of Georg Ratzinger when Pope John Paul II had become seriously ill during his final days of life:

"...I was repeatedly asked by people and by journalists too, whether my brother would become pope. My answer was always the same: "No, he certainly will not!"...

And his story about how he finally heard the news about his brother actually being chosen to be the successor to St. Peter was deeply touching:"I even experienced the "Habemus Papem" live. At the time I was called by a journalist who said she had just heard that white smoke had gone up in Rome and wanted to hear from me whether I knew anything more specific. "No," I answered truthfully, "I know nothing." Then I turned on the television and heard it there, like everybody else....I must quite honestly say that at that moment I was rather disheartened. It was a great challenge, an enormous task for him, I thought, and I was seriously worried. I saw neither the pomp nor the beauty of it, but only the challenge of this office, which now demanded everything of him, and the burden it meant for him. And I was sad that now he would probably have no more time for me. So that evening I went to bed rather depressed."

I can't imagine what it must be like to have such a famous and well-loved brother, one you'd like to keep for yourself but instead must share with the world. But now through the words of Georg Ratzinger, I have a little better idea of who our beloved Pope Benedict really is and of how much he and his older brother and fellow priest value their close family relationship which from every aspect seemed to be formed through a normal family life filled with love and prayer.

I heartily enjoyed My Brother, The Pope, and read through it quickly and eagerly. I am confident that all those who open the pages of this book will be deeply drawn into the loving story of two brothers whose only life desire has been to serve the Lord through the use of their talents and to draw others closer to Him and to His wondrous love.

(If you are in the Milwaukee area, you may be interested in attending a book signing and discussion with Bob Dolan about his book Life Lessons at St. Francis de Sales Seminary on April 23rd. You can view the event details at the Vocations Office Website "Think Priest" which can be found at this link.)