In the Rogers Park neighborhood of Chicago, just a few short blocks from Loyola University and St. Joseph's College Seminary, there is a magnificent church hidden away among the well-manicured lawns and red brick homes (which I believe are simply called "Bricks") of the quiet, shady residential area just off of bustling Sheridan Avenue.  St. Ignatius Church was built in 1906 and is a marvelously artistic and beautiful house of worship.

Last November when my family made our first visit to Chicago, I was left with just a few minutes as we were leaving town to literally trip up the church steps and fall into the middle of a Spanish Mass.  I took a few quick glances at the gorgeous frescoes on the church ceiling from the back of the church before racing back down the church steps to my family who were waiting for me in the van so that we could return home.


Ever since that day I was determined to return and get a more in-depth view of the church, so last May when we made another visit to St. Joseph's College Seminary, my husband Paul and I took a  leisurely walk through the neighborhood and found that the church doors were open in the middle of a weekday.  We wandered in and caught the end of a tour given to school children.  During this brief visit I fell in love with St. Ignatius Church, and eagerly looked forward to my next visit.

Finally my opportunity arrived!  When we brought my son John down to St. Joseph's College Seminary to begin the fall semester, my family and I had some time to walk back to St. Ignatius Church.  The church doors were locked, so Fr. Matthew Widder, who had joined us on our trip to Chicago, suggested we check in the parish office to see if someone could let us in.  And someone could!  We met the pastoral assistant, Kathy Morris, who kindly offered to give us a personal tour of the church. Kathy explained that Milwaukee's Archbishop Jerome Listecki had been the pastor of St. Ignatius during some major renovations and she had many fond memories of him.  So she was especially glad to give us the tour based on our association with the Archbishop.

One of the things that I was eager to learn more about was a painting of the crucified Christ that was surrounded by silver medals hearts.  Kathy explained that St. Ignatius has a large Peruvian population and the painting is part of a Peruvian tradition called The Lord of the Miracles.   According to Peter Holderness at Medill Reports Chicago, "The original Lord of the Miracles is an icon painted by an African slave who was converted to Christianity by Spanish authority in Peru in the 16th century.

The mural depicts a dark-skinned Jesus on the cross, and is also known as Jesús Moreno.  When successive earthquakes destroyed Lima in the 17th and 18th centuries, the mural survived and a growing number of Spaniards and mestizos joined Afro-Peruvians in revering the image.

Lima’s citizens sought the icon’s protection from deadly earthquakes, and it became an intimate part of their daily lives, according to Paerregaard, who writes that a Peruvian immigrant in Europe explained, “El Señor always accompanies us, we just have to bring his image with us and take it to the streets wherever we are.”

There is a wonderful pictorial slide show of the 2007 Chicago procession of Peruvian-Americans from St Ignatius Church taking The Lord of the Miracles into the streets at this link.


Another highlight of the church was a relief on the altar of Christ, the Blessed Mother and St. James.  Our guide wasn't sure why St. James was chosen to grace the altar at St. Ignatius but she did know that Archbishop Listecki had chosen this relief so it may be a good future topic of conversation with the Archbishop, trying to learn the secret of the relief's portrayal.  Last spring when Archbishop Listecki confirmed my son Justin, he spent a great deal of time questioning each confirmand about their choices of saint's names.  If any young man had chosen St. James for his confirmation name, the Archbishop was sure to ask him "Which St. James, the greater or the lesser?"  Now I will have to ask that same question of the Archbishop!

By far the biggest surprise was a wonderful chapel hidden away behind the large church.  The Blessed Virgin Mary Queen of the Angels Chapel was no small chapel, but was as large as any other church!  Because this chapel sits beside the altar, the pews have an interesting feature like that found on old trains-the backs move so that the chapel can accommodate overflow crowds during Mass in the main church.


I really admired the painting of my favorite station of the cross, the sixth station, that was inside this chapel.  I wonder why St. Veronica was painted as an angel and who the two angels are beside her.

And of course, I just had to take a picture of the statue of one of my favorite saints, St. Margaret Mary, and right beside her, The Sacred Heart of Jesus. 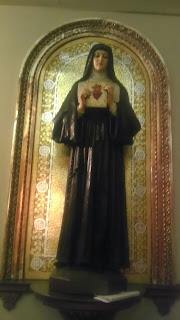 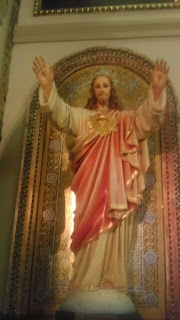 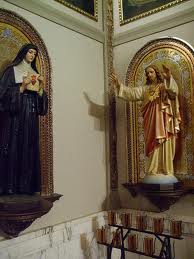 I highly recommend a visit to St. Ignatius Church in Chicago, you are sure to be inspired by the beauty!  My next goal regarding this beautiful church will be stay and pray at Mass while there!