For Christ in His Priest 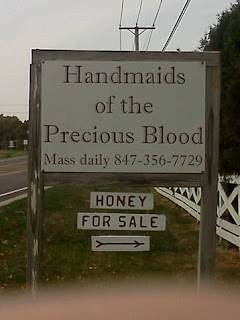 My family and I had enjoyed a wonderful weekend with my son, John, who had come home from seminary college for a long and busy weekend filled with special events in the Church.  On Tuesday, the time had arrived to say good-bye, and my son Justin and I planned to drive him back to Chicago so he could resume his studies.  As a new Oblate of the Precious Blood, I thought it would be nice if we could pay a visit to the Priory of the Handmaids of the Precious Blood in Lake Villa, Illinois.  When I learned that the priory was only an hour-long drive from my home and wasn't too far outside of Chicago, I called to make arrangements for a visit on our way back to the seminary.

The drive to the seminary was beautiful as the route took us away from the busy city and super-fast freeways and toll-ways, through the scenic countryside, where the abundant trees were a mosaic of red, yellow and orange.  When we arrived at the Priory we found it to be a large piece of property with several buildings that had formerly been a farm, nestled beside several fields of corn.  The first building we saw had a sign on it that read "Chapel".  I parked the car near the back of the building and we went inside to offer prayers of thanksgiving for my recent Solemn Resolution of Love.

Upon entering the chapel foyer, I stopped to light a candle of gratitude.  To the right we saw a sliding glass door that led to the chapel.  Kneeling at the altar before the monstrance we saw one of the Handmaids who was deep in prayer.  I let out a little gasp of joy because the sight of this woman in prayer was exactly like the one that I had looked at many times on the internet when I would visit the Handmaids of the Precious Blood website.  I couldn't believe that I was actually in the presence of a real-live Handmaid of the Precious Blood after having only communicated through correspondence for the past year. 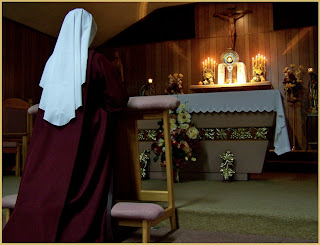 My sons and I knelt in the back row and I felt extremely honored to pray the prayer of the Lay Associate of the Priesthood and the Prayers for Priests and Those Destined for Priesthood that the Handmaids of the Precious Blood pray every day in the very same chapel.  Then I prayed for every priest and seminarian as well as those discerning a call to the priesthood whom I have carefully listed in my own prayer book.  I followed these prayers with a rosary and several other Marian prayers and then fell into silence in the presence of the Eucharistic Lord.  I was filled with joy!

When my sons and I left the chapel, we were greeted by a sister who welcomed us into the guest house and invited us to sit down and enjoy some coffee and bagels.  Sister kindly shared her own history with the Handmaids as well as the history of the priory.  We talked about Fr. Gerald Fitzgerald, sP, the founder of the order, and Fr. John Hardon, SJ, a long-time spiritual director for the order who initiated the Oblates back in the 1980's.   The Handmaids and I share a common friendship with Friar Paul Schneider, OFM Conv. who is also an Oblate of the Precious Blood.  Sister told me that she and the other Handmaids who live in the Priory in Illinois were granted permission to attend Friar Paul's ordination to the priesthood at the Basilica of St. Josephat in Milwaukee this coming May.  It will be a day of great joy!  She also talked with John about the friendship that the Handmaids share with Fr. Pawel, one of the staff members at St. Joseph College Seminary, who had asked the Handmaids to pray for the seminary on the occasion of the dedication of their new chapel and the consecration of the altar.  It was beginning to feel like a very small world and Sister already felt like an old friend.

She took us outside to show us the vegetable garden and all of the buildings on the grounds.  We stopped in the place where they sell honey as a means of earning income and Sister gave each of us a jar of the sweet treat as a congratulatory gift for becoming an Oblate.  They also earn money by selling hosts that are made elsewhere and are distributed through the Priory.

Before we left, Sister told us that we had to meet another Handmaid who used to work with the Oblate candidates by corresponding with them while they were in formation.  This sister was delightfully joyful and sweet.  I reached to shake her hand and she reached to hug me instead.  Then she exclaimed that it was a great joy for her to meet an Oblate in person.  She said that writing to Oblates was a somewhat "hidden" ministry because you rarely get to meet the people that you are writing to, so having the opportunity to stand face to face with an Oblate was a real treat.  I felt the same way about meeting her.  It was a beautiful moment that I will never forget!

I can't wait until another opportunity presents itself for me to pay another visit to the Handmaids of the Precious Blood Priory and to physically spend time on my knees with the women with whom and for whom I have been praying this past year and who, in return, have been praying for me and my family.

I am so overjoyed to be an Oblate of the Precious Blood!  It is a wonderful gift from God and a great benefit of being Catholic, to have the opportunity to move a little more deeply into prayer for the men who bring Christ to the world.  The spirit of the Handmaids of the Precious Blood is, "For Christ in His Priest".  I am grateful to live that spirit in my daily life through prayer and sacrifice for the men who give their lives to bring Christ to life for all of the faithful.