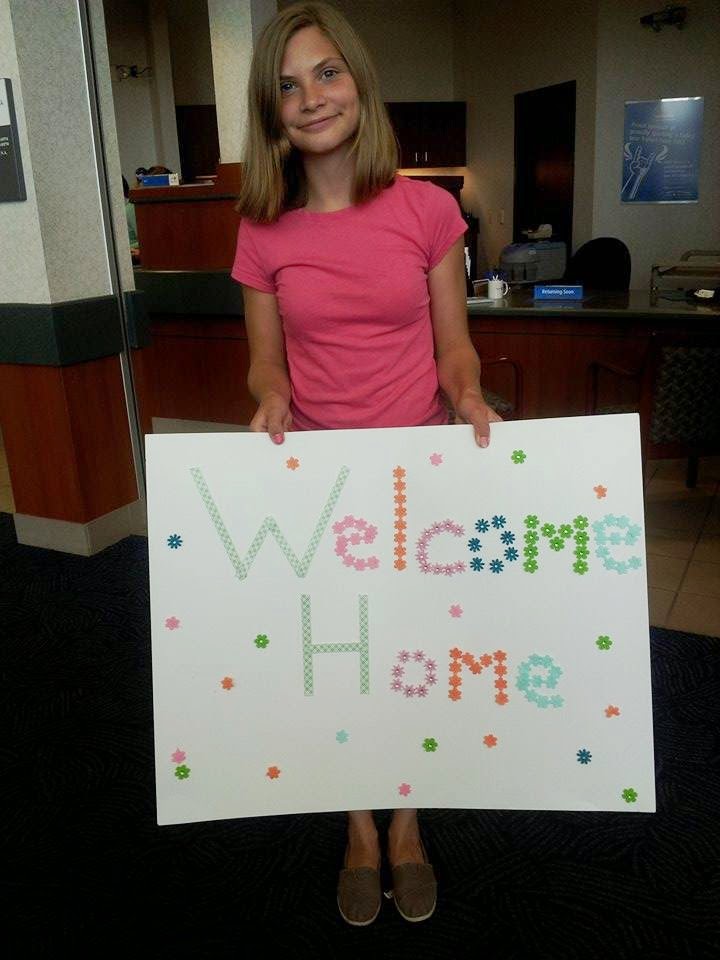 My wonderful time away from home praying and learning in the art-world of Kansas City quickly came to a close and it was time for me to bravely step into another new adventure-my first ever flight on an airplane!  Except I wasn't very brave.  I was very scared.

As I figured out my way around the airport rules and regulations I felt slightly sick to my stomach from nerves.  It was a good thing I had decided to skip breakfast that morning.  By the time I stepped onto the plane that would take me home, the only seats available to me were the middle seats.  I quietly asked a man if he could make some room for me so that I could sit, and I silently clutched my rosary tightly, stared at the back of the seat in front of me, gritted my teeth and prayed an Act of Contrition and Spiritual Communion in the event that this might be the last time I would have an opportunity to do so.  The pilot announced that there would be lots of turbulence above Chicago.  I had never heard anything good about turbulence from anyone so I was certain I would not survive this flight. As the plane flew toward the heavens, I thought that if I were to die I would at least have the good fortune of being close to what I hoped would be my eternal home.

Take-off reminded me far too much of a roller-coaster ride with a fast incline.  I took one small peek past the gentleman sitting by the window to see the earth quickly dropping below me, swallowed hard, and offered up my fear to the Lord.  After all, there was absolutely nothing I could do about my situation but to try and relax and to leave it in His hands.  Everyone else on the plane seemed to be very much at peace with where they were-they chatted or read as if flying were the most natural thing in the world.  I wondered how it was that so many people found the courage to fly routinely.  I thought about my parents who traveled the world to visit all of the religious shrines in their old age, and I offered a prayer to them as well, but I was sure that my lifelong dream of visiting Rome would never come to be.  I felt sure that I would never again let my feet leave the earth!

Now the clouds were floating past and the brilliance of the blue sky never seemed more clear and illustrious. Later, when my family asked me what the clouds looked like from the plane I replied that they looked the same as we see them from the ground, only upside down.  I thought with amusement about one of Dr. Caroline Farey's explanations of the Ghent Altarpiece by Van Eyck.  In the Annunciation scene the Virgin's words are painted upside down because she is speaking to God.  I was now flying in that upside down world with upside down clouds and upside down words that God continuously occupies.


After praying the rosary I was finally able to relax just a bit and occupied myself with St. Faustina's Divine Mercy in My Soul.  I declined the offer for a beverage and peanuts from the flight attendant and kept completely to myself, grateful that neither of the men whom I sat between attempted any small talk and left me quite alone in my minuscule space between them.

I was awash in gratitude when the pilot announced that we were finally flying over Milwaukee.  While the plane landed at what seemed like too rapid of a pace for me, I was finally able to peer out the window once again, hoping that the man with the window seat wasn't too creeped out by me looking past him, and I actually enjoyed noting some of the local landmarks that line Lake Michigan.  And now I was home, safe and sound on the ground once again.  I offered a prayer of thanksgiving for the safe and short flight.  Now I understood why Pope Saint John Paul II always kissed the ground upon landing from a flight and I felt like doing the same except I didn't want to draw attention to myself.

And after spending a weekend viewing beautiful and magnificent art, I found the most fabulous work of art in the world standing right in front of me-my smiling children with their Welcome Home sign.  I am certain that a more wondrous masterpiece has never been seen in all the world!
Posted by Anne at 12:00 AM