Patroness for a Priest

"Jesus said to her, "Woman, why are you weeping?  Whom are you looking for?" She thought it was the gardener and said to him,"Sir, if you carried him away, tell me where you laid him, and I will take him."  Jesus said to her, "Mary!"  She turned and said to him in Hebrew, "Rabbouni," which means Teacher.  Jesus said to her, "Stop holding on to me, for I have not yet ascended to the Father.  But go to my brothers and tell them, 'I am going to my Father and your Father, to my God and your God.'"  Mary Magdalene went and announced to the disciples, "I have seen the Lord," and then reported what he told her." ~John 20:15-18

This past weekend my family was graced and blessed to attend a beautiful Holy Hour Vigil of Prayer, an Ordination Mass and the First Mass of Fr. John Baumgardner.  The Ordination Mass happened to fall on the Feast of St. Mary Magdalene.

At the beautiful holy hour vigil held at Saint Francis de Sales Seminary, the priest spoke to a full chapel about the Magdalene and how she will be the special patroness for Fr. John.  He said, "As Jesus told Mary Magdalene not to cling to Him, so we, too, must not cling to Fr. John.  We must let him go in freedom to serve the Lord as he has been called.  Neither his family nor any future parishioners he may come to know should cling, so that he may be open to love all.  And this is hard for a priest, too.  But out of obedience the priest must go where he is sent."

In his homily at the ordination, Archbishop Listecki also spoke of Mary Magdalene.  He said that she possessed two essential characteristics:  faith and love.  Because she had confidence in the person of Jesus she was faithful at the foot of the cross and her love for him opened her eyes upon hearing her name spoken in a loving manner.

Then, the Archbishop addressed the ordinand directly:  "John, I know the same voice called your name.  His invitation, framed in love, was to join the priesthood and become an apostle announcing His life, death and resurrection which is the only hope."

Holy Father, May Fr. John Baumgardner be blessed with a long and holy priesthood under the patronage of St. Mary Magdalene!  May she guide his every step with her faithful love.  May he ever hear the voice of Jesus calling his name and leading him along the path to sanctity as he, himself,  leads so many souls along that same path.  Amen. 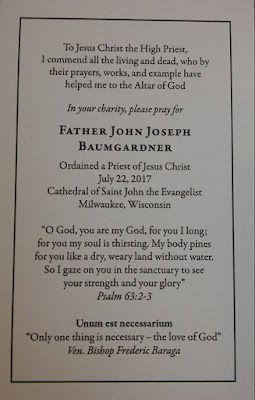 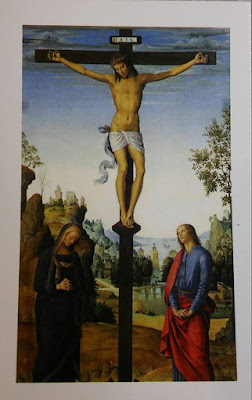