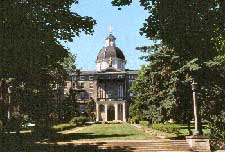 It’s time once again for Seminary Summer Camp. This year three of my sons with be spending a few days and nights at the Seminary of St. Francis de Sales to pray and play with other boys and to get a feel for daily life at the Seminary in an effort to help them discern whether or not God may be calling them to a priestly vocation. My son Jack is participating in the camp for Junior High boys in the early part of the week, and John and Justin will spend the latter part of the week at the camp for High School boys. John has participated in the camps for the past two years and enjoyed it so much that Justin and Jack thought that they might like it as well and decided to participate this year.

This is Jack’s first time away from home with the exception of few sleepovers with friends. He and his little sister Mary are very close. After I had left Jack at the Seminary and returned home, Mary started to cry profusely. “I miss Jacky!” she cried, and the tears just fell and fell. I suggested that she get her pet guinea pig, Benny, and play with him for a while until she felt better. I promised her that Jack was probably missing her just as much, but he would only be gone for two nights and the time would go fast. Still, when bedtime came around, she decided to sleep in Jack’s bed instead of her own so that she would feel close to him.

At 11:00, several hours after I had gone to bed, I heard the phone faintly ringing and I heard my husband ask, “What’s wrong? Do you want to talk to Mom?” It was Jack. He was crying and said he wanted to come home. Without pressing him further, I told him that I would be there within thirty minutes. Paul asked our son Joe to go along with me, since he was still up and I was grateful for the company on the long drive.

When we reached the Seminary, we found Jack and a chaperone standing in the doorway, waiting for me. Homesick. Jack had his bag packed and was ready to return to family and house full of the comfort of the known. Susi, the chaperone, said that Jack was welcome to come back the next day for Morning Prayer followed by Mass and breakfast with the Archbishop, and then a day filled with games, sports, work and prayer. She also mentioned that Jack had signed up to serve at Tuesday morning’s Mass, so she was really hoping that he would be there for that.

I knew that serving at Mass was something that Jack would not want to miss. Ever since he was trained as an acolyte earlier this year, assisting at Mass has been one of his favorite things to do. In fact, one of our sweet, elderly parishioners has been serving at the daily Mass three days a week. It’s getting to be a bit much for her, and she asked if one of my boys might take one day a week during the summer months. That night at dinner, I mentioned this to the boys and asked if any of them might like to help sweet Mrs. B out. Joe said he prefers to sleep late in the summer months. John and Justin who have both served at the daily Mass in the past, complained that serving at daily Mass is much harder than at Sunday Mass as the daily server is required to set up the altar and has more responsibilities. Jack piped up that he would like to take a weekly Mass to relieve Mrs. B from some of her work. Both John and Justin told Jack that he couldn’t handle it. In their wiser big brother ways, they told Jack that if they found it to be too hard, Jack certainly would not be able to manage it. But Jack firmly insisted that he wanted to serve and he would do just fine. Sure enough, that smart little boy took notes when Mrs. B trained him and he is confidently doing just fine serving at the Morning Mass. It is a treat to watch him grinning that huge smile of his the entire time he serves. And his delight is not lost on the elderly parishioners who are regulars at the morning Mass; his joy spreads to their hearts as well leaving everyone with a warm and loving feeling as morning Mass is over. I was certain that he would want to be there on Tuesday for the honor of serving at the Seminary.

As Jack and I climbed into the van and drove down the Seminary’s long tree-lined drive and back home, Joe asked Jack what it was that upset him so much that he didn’t want to stay at the Seminary.

“Well,” Jack replied, “during Benediction I started to miss my family and it made me sad.” Fr. Peter asked me why I was crying and when I told him, he said that he knows what that’s like to miss somebody that you love. And Susi told Jack about how much she misses her cat when she is away from him. Still, their words were not able to offer him the comfort of a night at home. He said he definitely wanted to go back in the morning for Mass and to spend the day, but he wasn’t sure that he would want to stay overnight the following night, either.

When we got home, exhausted Jack found Mary sleeping soundly in his bed, so he curled up on the floor next to his bed with a pillow and a few blankets and instantly drifted off to sleep. I thought of how much Mary had missed Jack, and here he was, right beside her and she didn’t even know it. Isn’t that just like God? When we really feel lonely for Him and need Him the most, He is right there beside us but we rarely realize it. And maybe, when we miss the people we love the most, they are also right beside us in spirit, missing us as just as much as we miss them. I prayed that Mary would feel comforted by Jack’s presence in her sleep, even if she wasn’t aware of how close he was to her.

Early the next morning, I woke Jack and we returned to the Seminary, while Mary continued to slumber in his bed. When we arrived in the chapel, I was feeling a bit intimidated and uncomfortable. I wondered if the other kids would look down on him for having left and if the staff were worried that he wasn’t quite ready for this experience.

My worries were soon allayed as Deacon Kevin greeted me and said “I heard you had a rough night last night. Thanks for bringing Jack back today!” I realized that this warm and welcoming group would do their best to make Jack feel as if the Seminary were his home away from home. I stayed for Morning Prayer and Mass and was so grateful to be part of such an intimate group in the Seminary Chapel. There were 21 boys staying at the camp, three Seminarians who were helping, Susi, the Rector and his assistant, the Vocations Director and his assistant, and the Archbishop, who said Mass. For me it was a real pleasure to be at that very special morning Mass, and as I quickly whispered goodbye to Jack after Mass, he smiled and said, “I think I’ll stay all night tonight,” and I left for work, tired, but joyful and confident that Jack would have a wonderful experience for the remainder of his time at Seminary Summer Camp.
Posted by Anne at 1:24 PM