Guest Post on the Papal Visit in the UK

My young English friend, John H., the founder of "A Vocation to be a Priest" has gathered his thoughts about the recent visit of Pope Benedict XVI to Great Britain and kindly shares them here... 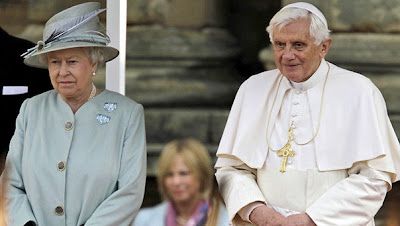 During and after the visit of Pope Benedict to Britain, I am so proud to be a Catholic, but especially an English Catholic! There has been a Christian presence in these isles for 1500 years and our land has probably produced more saints and martyrs than any other country on earth. At long last I know what Blessed John Henry Newman understood when he wrote "I am a link in a chain".

Pope Benedict made a State visit to the UK rather than a pastoral visit - that means he was invited by Queen Elizabeth and Her Government. While I was only able to be physically present at one event (Hyde Park in London), I followed every single event on BBC TV which was truly outstanding. The warmth of welcome by the Queen was commented by all, and the Holy Father managed to win many hearts and souls by his humility and warmth and by his message. He addressed many political leaders in Westminster Hall (including four former Prime Ministers) and told them to be aware of rampant secularism which denies the voice of the Church and the Gospel in the affairs of State. This was especially significant because Westminster Hall was the place where St Thomas More was tried for putting his conscience before Government.

Talking about secularism - it was a washout - a total and abject failure. The protests against the Holy Father amounted to a pathetic 5000. At the same time 240,000 people lined the streets of London to greet him, wave flags, while 80,000 joined the Vigil in Hyde Park. This was outstanding - in the middle of a great and huge city, there was total silence as we adored Jesus in the Blessed Sacrament. Even the skeptical secular press was won round, who had predicted that the Papal visit would be a disaster, with nobody turning out.

The Holy Father had a punishing schedule, which included a visit to a retirement home, and a meeting with victims of clerical abuse. But for me, he won the hearts of everyone in his interaction with young people - they simply loved him! He told us that we were created for love and that is where we should seek our vocation.

It is reported by our Bishops that the visit was highly successful - the Pope has encouraged us, but he has been amazed at the vibrancy of Catholics in the UK.

You may know that we have a special link to the USA - the miracle from Blessed Cardinal John Henry Newman was via a Deacon in Boston.

As our Bishops have indicated - we now need to think about keeping alive the momentum of the Papal visit.
Posted by Anne at 8:15 AM