A Story From the Abortion Mill by Fr. Don Hying

Late last Saturday morning, a group of us went to pray at the abortuary on Farwell Avenue. Usually, I go earlier in the day when pregnant women are entering the building and the pro-abortion escorts are stationed in front to keep the clients from talking to us. At 11 AM, the escorts were gone because all of the women were already inside. One by one, the women came out, walking slowly, looking dazed, holding a brown bag, gingerly entering their boyfriend’s car and driving away. It was heartbreaking, like watching a steady stream of casualties returning from some gruesome and hidden front, where the invisible violence could only be read on the bodies of the survivors.

After praying a rosary and a Chaplet of Divine Mercy, we were thinking about leaving when suddenly a woman who has worked at the abortion mill for years in some form of management came driving up in her Jaguar, dashed inside and emerged moments later. As she passed me, I spoke in a quiet and calm voice, “Stop killing people here!” She turned on me in a visceral and hysterical rage, shouting about priests abusing little boys, calling me “pathetic”, enraged by my promise to pray for her and finally giving me the finger as she drove away.

What impressed me about such a brief and disturbing incident was the startling fact that the woman never denied that she was indeed helping to kill people or that what I said was in any way false. Unable to articulate any cogent or logical response to my quiet demand, she responded with hysteria, obscenity and ad hominem assaults. The immediate reaction of rage and hate, shorn of any logic or sense, led me to see how weakened the abortionist position has become. With the women’s care center across the street, growing numbers of people who identify themselves as pro-life and new legislative momentum the folks at Affiliated see the power of their pro-death stance weakening. 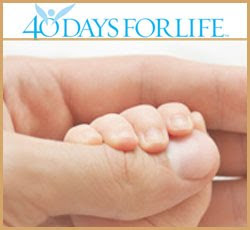 With the 40 Days For Life starting this Ash Wednesday, now is the time for us to give public witness to our belief in the sanctity of nascent life. The abortionists want their deeds to go unseen, unnoticed and unchallenged. By our public prayer and presence, we shine the light of God on a very dark place.
Posted by Anne at 10:29 AM