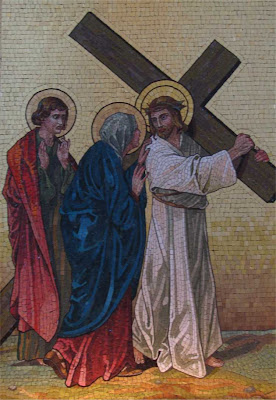 Yesterday I had a choice. I could stay home and help my family paint the staircase and kitchen walls, partaking in a little spring cleaning and spiffing up of the house for my son's upcoming Confirmation party, or I could sneak away to the Cathedral of St. John the Evangelist for the Ordination to the Transitional Diaconate of five worthy young men. Well, just try to keep me away from Church, especially when it allows me the opportunity to pray for men who are on the journey to priesthood! I am so grateful that I chose the latter because if I hadn't been there, I would have missed an impromptu resemblance to the Fourth Station of the Cross.

Yesterday's beautiful Ordination Mass saw five fine young men take one step closer on their journey to the cross, the complete and total laying down of their lives for the Lord and His Church. At that Mass, hundreds of people welcomed Yamid Jose Blanco, Juan Manuel Comacho, Brad Alan Krawczyk, Ryan Joseph Preuss, and Hans Flondor of the Conventual Franciscan order, to the transitional diaconate and their final year of study and preparation for the priesthood.

Yamid is originally from Columbia, South America and his family traveled a great distance to be with him on this most special and important date. At the ordination Mass, the mothers of those receiving the Sacrament are asked to carry the gifts to the altar. After presenting the gifts, the mothers each had an opportunity to embrace their sons before once again taking their seats. From my vantage point far in the back of the church, I could sense that something was slightly amiss from the plan, things seemed to be taking longer than they should. As I strained to catch a better look I saw a touching moment of deep holiness that brought tears to my eyes and I'm sure to the eyes of many others who witnessed that scene. Long after all of the other mothers had taken their seats, one remained standing. Yamid's mother lingered, embracing her son while Archbishop Listecki patiently and lovingly looked on.

On Jesus' long and tortuous walk to his death, that same scene played out. Mary, after many years of only seeing her beloved son from a crowded and distant vantage point, who was often denied the close contact with her son to which she was so accustomed from His days of youth, was finally standing right in front of Him. Here at the Fourth Station, she could only embrace Him with her eyes, but oh, how her arms and heart must have ached to physically embrace him, to hold him up if only for a moment, to take some of his pain away. It was her moment of complete misery, to love Him so much but to have no choice other than to let Him go.

And here was Yamid's mother, at last after many years apart, able to reach out and hold her son. She knows that from now on, with each day that draws him closer to the priesthood, she will only see him from a crowded and distant vantage point. But at this moment when she met her son at the altar, her heart bursting with pride and joy and sorrow and love and every possible human emotion that a mother can have for her son, she held him long and close, knowing that beyond this Fourth Station he will be out of her hands and his life will no longer belong to her, but to God alone.

(picture source: The Cathedral of St. John the Evangelist, Milwaukee)
Posted by Anne at 1:59 AM

Email ThisBlogThis!Share to TwitterShare to FacebookShare to Pinterest
Labels: ordination, seminary, stations of the cross