On Monday morning as I was performing my usual multitasking at the gym-running on the machine of torture while listening to upbeat music on the MP3 player, while reading a spiritual book, while glancing at EWTN on the television that is connected to the elliptical machine-I noticed that Archbishop Dolan was a guest on Fr. Benedict Groeschel's program. Quick as quick could be, I unplugged the music and stuck the headphones into the television outlet.

Archbishop Dolan was speaking about his three beautiful nieces who were all getting married this summer and mentioned that he is the proud uncle to twelve nieces and one nephew, Patrick, who is four years old and is already a priest. "Yeah, I ordained him at his baptism," he quipped. Although the topic of the program was quite serious about the valiant battle that Archbishop Dolan is waging to preserve the sanctity of marriage from those who would redefine it to include same-sex marriages, I know that I must have had a goofy smile on my face during my entire workout and even must have laughed out loud several times. I noticed that my son Joe, my workout partner, was doing all he could to avoid me, the embarrassing mother.

After my workout, I asked Joe if he could guess who was on TV that was causing me to smile so much and his answers were proof to me that he clearly understands that the things and people that I care most about in this life are those that bring me closer to God. His first guess was Roses for Our Lady, followed by Bishop Hying. Both worthy guesses, both would have made me happy beyond words, but I told him to think a bit more globally and so his next guess was the Pope. When I told him it was someone just a little less important than the Pope he hit the nail on the head with Archbishop Dolan. Oh, how I love that guy!

My favorite line of the show came when Fr. Benedict mentioned that he knows this battle will drag on for many years to come and because of his advanced age, he's sure that he will have to continue it from purgatory. He said that he knows that many people don't believe in purgatory anymore, but he still does because he lives in New Jersey. Funnier still was Archbishop Dolan's speedy comeback: "I believe in purgatory, too. I watch your program!!!" And, for the first time ever, I was sorry to end my workout; I would have gladly continued running that morning race just for the joy of listening to one of my spiritual heroes share his efforts to bring the world to holiness. 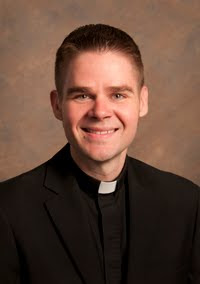 But I have another hero whom I am equally eager to watch on television. My dear friend, Fr. Christopher Klusman, will be featured on a 30 minute program called "Hearing God," which will be aired on Sunday, August 14 at 2 pm on WISN-TV 12 (Milwaukee.) It is a documentary by Bob Dolan (Archbishop Dolan's brother)of Dolan Productions, LLC. According to Fr. Christopher, the program features the last part of his seminary studies at St. Francis de Sales Seminary, his Ordination to the Priesthood, his Mass of Thanksgiving, and a few things he did ministry-wise at his 2 new part-time assignments as a new priest. Tune in if you are able! It's sure to be wonderfully heart-warming!