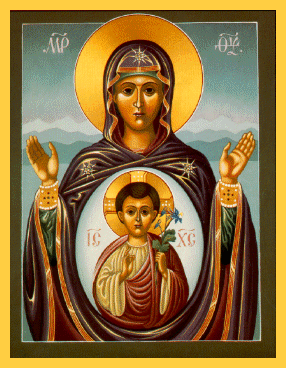 I've been asked to speak about the Blessed Mother at my parish this coming March. It's part of a monthly program called Church Chat where "experts" speak about an aspect of the Catholic faith in a question and answer format. When I was first approached to speak about Mary I was so thrilled that there was to be a session about her that I quickly said yes. Of course, unlike the Blessed Mother, my yes's are never really final and peaceful, they always seem to be followed by a great deal of anxiety, and this yes was no exception. I soon found myself panicking over what I should say and the possibility that someone might ask a question that I'm unable to answer, after all, I'm certainly no theologian, I'm just a mom! Besides, I'm most comfortable hiding behind a keyboard, not standing out in the open and speaking to others.

I tried to back out and suggested that they ask someone who really knows what he's talking about and has the ability to inspire, like Bishop Hying. But, everyone knows that the Bishop is terribly busy these days, so my suggestion was downplayed with that excuse and the affirming words that "everyone has great faith in you and is confident that you will do a good job." So, I'm going to speak about Mary this March and you can be sure that I have been praying to her day and night pleading for her assistance and will go on praying to her until that talk is behind me and the people who attend will have gained some new and wonderful insight into the Blessed Mother and why Catholics are so devoted to her.

I'm sure it also helps to read and study all that I can get my hands on about our wonderful Lady, so with that in mind, I recently took my beloved copy of Caryll Houselander's The Reed of God off the bookshelf and have decided to make it an Advent tradition to re-read this enchanting little book each year. Her words, her wisdom, are achingly beautiful and resoundingly true, and the way she sees inside of the life of the Blessed Virgin Mary and the working of the Holy Spirit within her is so inspiring.

Maybe I can just read The Reed of God at the Church Chat session and let Caryll Houselander do all the work! I certainly could use a little of the secret trust that she speaks of in this segment from the chapter Fiat...

"Our Lady was at the most fourteen when the angel came to her; perhaps she was younger. The whole world trembled on the word of a child, on a child's consent. To what was she asked to consent? First of all, to the descent of the Holy Spirit, to surrender her littleness to the Infinite Love, and as a result to become the Mother of Christ. It was so tremendous, yet so passive. She was not asked to do anything herself, but to let something be done to her. She was not asked to renounce anything, but to receive an incredible gift. She was not asked to lead a special kind of life, to retire to the temple and live as a nun, to cultivate suitable virtues or claim special privileges. She was simply to remain in the world, to go forward with her marriage to Joseph, to live the life of an artisan's wife, just what she planned to do when she had no idea that anything out of the ordinary would ever happen to her.

It almost seemed as if God's becoming man and being born of a woman were ordinary. The whole thing was to happen secretly. There was to be no announcement. The psalmists had hymned Christ's coming on harps of gold. The prophets foretold it with burning tongues. But now the loudest telling of His presence on earth was to be the heartbeat within the heartbeat of a child. It was to be a secret and God was so jealous of His secret that He even guarded it at the cost of His bride's seeming dishonor. He allowed Joseph to misjudge her, at least for a time.

This proved that God knew our Lady's trust in Him was absolutely without limit. Everything that He did to her in the future emphasized the same thing. His trust in her trust of Him."
Posted by Anne at 4:11 PM