"Being a seminarian is a great life and I would only trade it for one thing, being a priest."
~Fr. Ryan Pruess, newly ordained

Another ordination day is upon the Archdiocese of Milwaukee!  In what has now become a tradition at Imprisoned in my Bones, I offer a re-post of a reflection on the day in light of the Ascension.

Please hold the following new priests in your prayers: 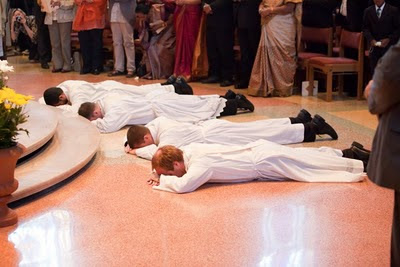 He lay on the cold, marble floor, face buried in his arms, body covered by white alb, with only the back of his head and his black shoes exposed. While the Litany of the Saints chant swirls throughout the Cathedral, he submits himself to God and His Church, and as the last echo of the chant fades away, he will rise to face the challenge of his submission.

Later in the Liturgy, he assumes a posture of kneeling, as one by one, his brother priests lay their hands upon his head, calling down the Holy Spirit to dwell within his soul, and forever change him. Each set of hands that presses upon him creates more room within him for the indwelling of the One who will assist him to rise to his new life in the Spirit.

As he is invested with a stole and chasuble, a visible sign that he is one who has “put on Christ”, it seems like a veil has shifted and his appearance takes on the look of one who will rise above the ordinary to that of an extra-ordinary leader, one who will care for others as a father, a mother, a sibling and a friend. It is clear to see that his call is being fulfilled and his face shines with the brilliant light of Christ.

Finally, kneeling once again, the Archbishop consecrates his open hands with the Chrism that will soak through his skin and become a permanent part of him. Leaving him with a kiss upon those holy hands, the Archbishop watches him rise to face the church full of witnesses, no longer simply a holy man, but now “a priest, forever”.

This day of Ordination is also a day of Ascension for him, when, like Christ being lifted to heaven in a cloud, he, too, is surrounded by a cloud of sweet and fragrant incense which rises in prayer. The new priest himself becomes a prayer that will rise to bring Christ to the world through his love, his faithfulness, his service and his own words of prayer.

The overwhelming message of this day is “get up, begin, and rise”. After many long years of preparation, it is time to magnify the presence of the Lord within himself and allow it to surge outwards to all of the faithful. From this day on, each time he elevates the host and chalice, he himself will ascend to a loftier place, the place of heaven on earth as he acts in persona Christi. And as the faithful look on, our very spirits rise to heaven with him as we flourish in prayers of adoration for our Redeemer, and prayers of admiration and thanksgiving for the man who brings the True Presence of our Lord into our hearts and souls at each Mass.
Posted by Anne at 12:01 AM