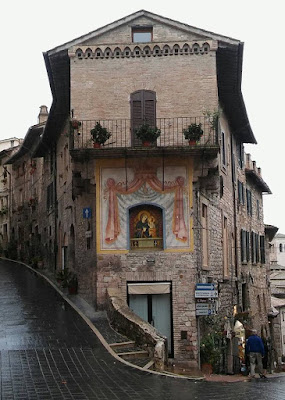 Assisi was instant love.  Who wouldn't love it?  Not only were its churches magnificent and it's religious history profound but the city had an old-world charm with winding and steep cobblestone streets, buildings covered with flowers and plants, and windows and doors that captivated my heart. Our stay in Assisi felt like a step back in time and was much too short.

My deepest prayer in Assisi was for peace, especially for peace in my hometown of Milwaukee which has been so beleaguered by violence in recent months, and for my pastor, Fr. Tim Kitzke, who has been named the Vicar General for Urban Ministry in Milwaukee and is working so hard to bring peace to our city.  I know that my prayer for peace, united to the prayers of St. Francis, was very strong here in the saint's hometown.

It was late in the day when we arrived.  Our first stop was a quick visit to the Basilica of Our Lady of the Angels at the bottom of the hill of Assisi which holds St. Francis' Portiuncula and the Transito where St. Francis died.  We weren't allowed to take pictures inside of the Basilica and, because Mass was going on, we had to move quickly and quietly through the church so I don't have a lot of memories of what it looked like inside.

However, there is one particular memory of the Basilica that will live in my memory forever.  Just as we were moving toward the end of the tour and getting ready to leave, Patrizia, our fabulous guide, told us to turn around so we could see a miracle.  And there, on the pillar ledge, sat two white doves. Patrizia told us that those doves are always there and never leave.  I was in awe because who else but St. Francis, who preached to the birds telling them to be grateful to God, would have the long-term devotion of these beauties in his Basilica?  Later that night, back at our hotel room, I posted a picture of those doves on my facebook page and was then even more in awe when my friend George left this comment:  "They're still there?  They were there ten years ago when I visited Assisi!"

We weren't allowed to take pictures in any of these churches.  At first I thought that was unfortunate but considering how outrageously gorgeous they were, it really was a blessing because I wouldn't have been able to put my camera away, there was just so much to see and take in! What really amazed me about the Basilica of St. Francis was that it was actually two churches, one right on top of the other!  I sincerely could not tell that from looking at the outside.

Still, I really would have liked pictures because I wanted to be able to see the inside of The Basilica of St. Francis again. It was so marvelous and no matter how long we would have stayed there it wouldn't have been long enough to admire and pray with all of the beautiful frescoes.  So I'm glad that I found a website where I can view all of the beauty of those churches right online, and the quality of those pictures is much greater than any I could have taken. I encourage you to pay this website a visit and enjoy and pray with the images you find there.  You will be most happy that you did!  http://www.sacred-destinations.com/italy/assisi-san-francesco/photos

Further down the hill from the town center of Assisi we found the San Damiano Monastery where St. Clare established her order of nuns, the Poor Clares, and also where she died.  Bishop Don shared these facts about St. Clare with us:  She was born in a noble family whose plan for her was to marry a noble man.  Then Clare saw Francis acting out the Gospel in a radical way and she snuck out of the house and met Francis who cut her hair and helped her to make her consecration.  According to legend, her family came to get her to bring her back home but as they tried to lift her she became very heavy and they weren't able to move her.

Bishop Don commented that it might be easy to criticize her family for their unhappiness about Clare's decision to become a consecrated nun but her family was much like the parents in the 1960's whose kids became hippies.  In a way, Francis and Clare were like those hippies but in a religious context.  And, as is true even today, sometimes parents can be the biggest obstacles to religious life.

Regarding San Damiano, Bishop Don said that while Francis was out evangelizing, Clare was here praying.  There is a story regarding Saracen soldiers who came to attack Assisi.  All of the nuns were in terror but St. Clare bravely took the monstrance containing the Holy Eucharist and carried it to the window at the top of the monastery where she blessed the Saracens with it and they all fled.

Before she died, she was too sick to get out of bed so the Mass miraculously appeared on the wall of her cell.  Because of this she was made patroness of television.

The order of Poor Clares is very austere and due to that austerity Pope Innocent IV only approved her order two days before she died.  When we made our way through the monastery, we climbed steep steps that led to a large, bare room, the very room where St. Clare carried the monstrance to deter the Saracens.  It was this room, on beds of nothing more than straw, that St. Clare and her sisters slept. After so many hundreds of years, the building itself maintains its austerity.


With the time that we had free to explore I wanted to look for a St. Francis holy card for a sweet little friend of mine from church.  I mentioned this to Bishop Hying when we had finished lunch and he suggested that we go back to the Basilica of St. Francis and look in their gift shop so that our purchase would support the church.  So Paul and I took his advice and we began our adventuous journey.  Now I've always prided myself on my sense of direction, but I think that St. Francis was trying to shake some of that pride off my soul, because I insisted that I knew the way to the Basilica but I only succeeded in getting Paul and I lost.  Luckily, Paul's sense of direction is not askew and he was able to get us to the Basilica, but not before we discovered a little hidden treasure.

We found an intriguing staircase and couldn't resist exploring.  At the bottom we were surprised to discover the birthplace of St. Francis himself!  The small room has been made into a church and the door was open for visiting. 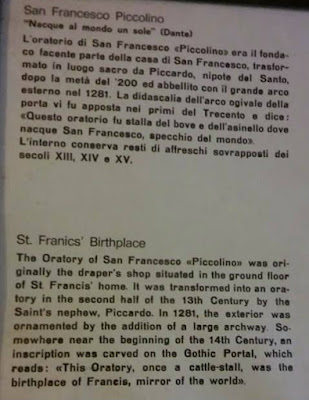 After our brief visit to the oratory we continued on our way through the winding. twisting roads of Assisi.  We stopped at one of the many restaurants for our first Italian gelato.  The pistachio and lemon were both divine!  Paul and I were a little amused when we heard the Beatles singing "Love Me Do" on the gelato shop's radio.  As our time in Italy continued we found that it was a common occurrence to hear American rock music like Deep Purple's "Smoke on the Water" and Bon Jovi's "You Give Love a Bad Name" playing inside many gelato shops and gift shops.  I suspect that Italy caters a bit too much to the tourists.  In actuality we would have preferred to hear authentic Italian music playing at the shops we visited instead of American music!

We eventually found the Basilica of St. Francis and there was Bishop Don standing in the upper church praying with the frescoes!  We were surprised to see that he had gotten there so quickly as we had left the restaurant before he did.  He must have taken the direct path while we were wandering the long way!

When we arrived back in the village we had just enough time to stop inside the Santa Maria Sopra Minerva before our bus took us back to the hotel. The exterior of the church seemed very out of place in Assisi and the explanation is that it was actually an ancient temple of the Roman Goddess of wisdom, Minerva, having been built in the first century right over her burial place.  Over time the temple was abandoned and when restored was used as a church and then a prison and then a church again.

From Sacred Destinations:  "In 1539, Pope Paolo III, making a visit to Assisi, ordered the Temple of Minerva to be completely restored and dedicated to the Virgin Mary, queen of true wisdom. The temple then took the name of Santa Maria sopra Minerva (St. Mary over Minerva). In 1613, the bishop of Assisi donated Santa Maria sopra Minerva to the friars of the Third Regular Order of St. Francis."

When we stepped inside the church we found another group of pilgrims praying the Divine Mercy Chaplet and they welcomed us to pray with them.  How amazing it was to pray inside of a church with a 2000 year history!

Our next stop:  Siena!


some of the reasons I fell in love with Assisi 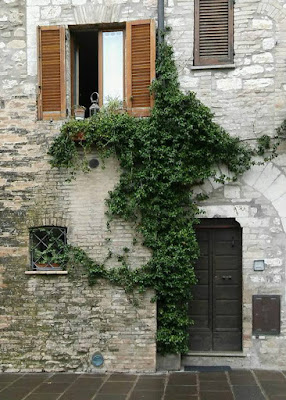 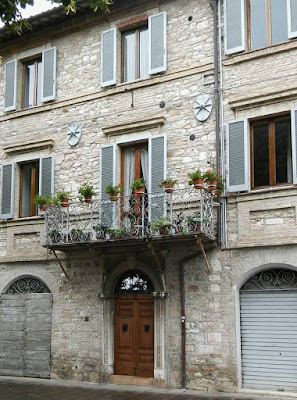 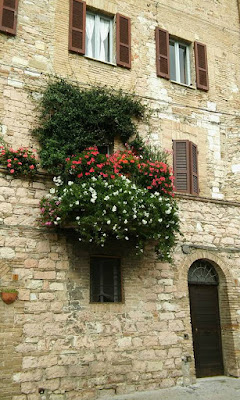 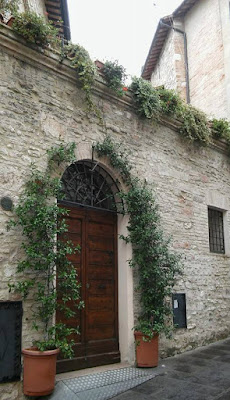 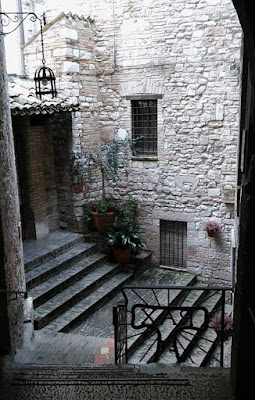 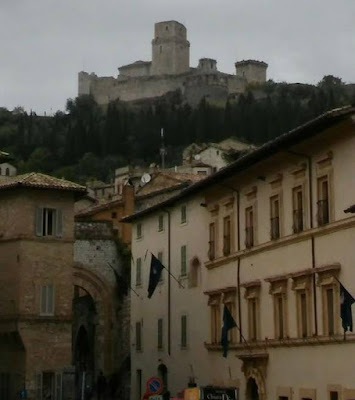 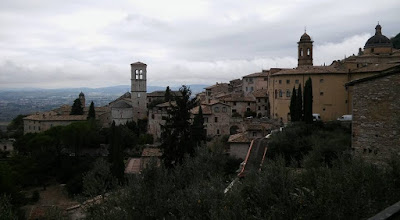