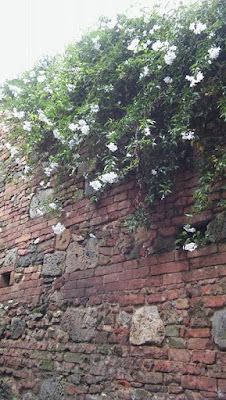 When we arrived in Siena our first stop was at The Basilica of San Domenico where St. Catherine of Siena's relics of her head and finger can be found.  I have to say that this was the only church in all of Italy that I was disappointed in.  Compared to all of the beautiful churches we had just seen in Assisi, it was very plain with modern windows that were from the 1980's.  Our guide explained that the church had been modernized to suit decorative tastes over the years and many of the frescoes were covered over with plain paint and the new windows replaced former windows that were damaged.  What a pity.  St. Catherine is such a powerful and amazing saint that her relics deserve to be stored in a magnificent setting. Despite the appearance of the church, it was extremely powerful to pray before the skull and finger of St. Catherine.  I asked her to pray for my daughter and I, and for all women, that we may model her strength and wisdom in seeking after the Lord.

Here at the Basilica we discovered a beautiful display of small, framed hearts and other assorted objects and pictures.  We learned that these are called ex votos.  They represent a vow completed or a prayer answered.  In thanksgiving, the faithful would purchase an ex voto to leave at the church. These are similar to someone leaving crutches behind at a church if they were healed of an injury or the modern practice of donating money to the church in thanksgiving for answered prayers.  I  just couldn't get these ex votos out of my mind during the remainder of the pilgrimage!  I found them to be absolutely exquisite, and from the moment I saw them I looked for them in every gift shop we visited, but sadly, they were no where to be found.


Following the Basilica of San Domenico we began a walking tour of the city which led us to the childhood home of St. Catherine.  If you visit this link and click on the pictures you will find some wonderful panoramic views of her home which is now a church.  When we left St. Catherine's childhood home we enjoyed a lovely walk through the charming streets of Siena to the Duomo.  I couldn't help but be impressed by the skill of the Sienese drivers as they navigated narrow, hilly, winding streets, turning blind corners and passing pedestrians with ease.  Such expertise I could never hope to have!

The following images show some of the charming scenes we found as we walked the streets of Siena.  It was hard to keep up with our group because I kept stopping to take pictures!  Although much larger and very different from Assisi in many ways, Siena was equal in its beauty.  And at the end of the journey through the streets we arrived at the Duomo which was such a beautiful church that I had to keep picking my chin up off the floor, I couldn't believe such beauty could be real! 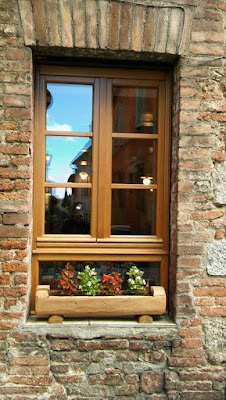 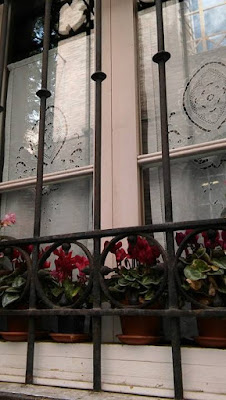 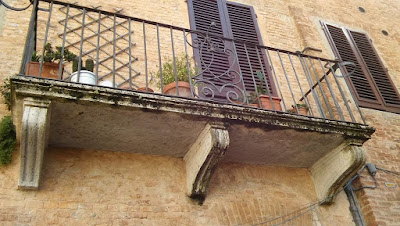 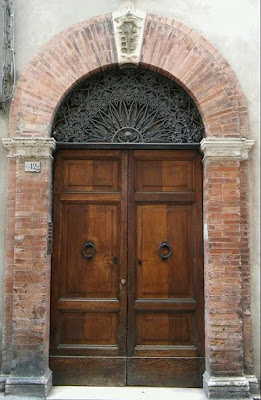 The Cathedrale de Santa Maria, usually just referred to as the Duomo or Divine Beauty, was built during the 13th and 14th centuries and has been so well cared for that everything within it is absolutely perfect.  As I marveled at the amount of work that went into building this majestic work of art for the Lord, especially at a time when there wasn't the convenience of modern machinery, Bishop Hying furthered my astonishment when he told me that many of the people who worked on this church never lived to see its completion.  Can you imagine giving your whole life to working on something that you would never see in your lifetime?  What a gift! What great love!

The pictures below are just a small sampling of all of the photos I took.  Of course none of my pictures do the Duomo adequate justice.  It's one of those places you just have to see to truly appreciate.


The floor of the Duomo is usually covered to protect its delicate and beautiful inlaid marble mosaics, but we were fortunate to be visiting at one of the short times of year when we could view the mosaics uncovered.  It's absolutely amazing to think about the creativity and talent of the artists who created these masterpieces.  The mosaic below is the story of Fortune.  The nude woman is standing on a sphere and a boat to show the instablility of life.  Wisdom sits in the top and jewels and riches are being thrown away by Crates to show that the things of this world are not lasting.

The worship space in the Duomo wasn't the only thing that was specatucular.  The Piccolomini Library, which is inside of the Duomo and houses a collection of music books, was absolutely astounding!  I couldn'tt believe that a church could have such an amazing library!  I wasn't sure how much more my senses could handle!

It was here at the Duomo that the most heart-racing experience of our pilgrimage happened to Paul and I.  Toward the end of the tour, our guide allowed us some quiet time for silent prayer in a side chapel. After kneeling in silent prayer for a short time, Paul and I stopped to light a candle.  When we were through we turned around and found that our entire group was gone!  We went outside and couldn't see anyone from our group among the hundreds of people walking about!  We didn't know where the next destination was so we couldn't even ask for help in finding it.  We were lost!  Because our group was so large, there were 80 people all together on our pilgrimage, we were divided into two groups-red and green.  As we stood outside the church wondering what to do we noticed some of the red group members moving toward the side chapel so we followed them and found that the red group was just finishing their tour.  So we stayed with them and when their tour of the Duomo was complete we followed them to the Piazza del Campo, the city square, where we found our green group as they were splitting up for lunch and free time.  What a relief!

The Piazza del Campo was encircled with restaurants and we enjoyed a very relaxing meal after being frazzled by our experience of being lost.  We were treated to a beautiful impromptu concert by one of the waiters during our lunch.  The waiter's voice was angelic as he sang an traditional Italian song, but we were so surprised to turn around and see that this singer with an Italian voice was actually Asian!  Italy it seems, is a melting pot much like the United States.


After lunch we had some time to wander around the Piazza, relax in the sun and visit some shops.  Paul and I stopped in a quaint little grocery store.  It truly was little consisting of only three rows of food but included what looked like an amazing butcher shop and bakery.  We had been looking for a restroom but couldn't find one anywhere so I asked the baker if he could help me.  He led me to this display of pastas and grains and told me that it was the bathroom.  I was a bit confused but soon discovered that the wall opens to reveal a bathroom!  It was the most interesting and amusing experience we had in Siena!

From Siena we travel to Loreto, one of my favorite spots on the itinerary!