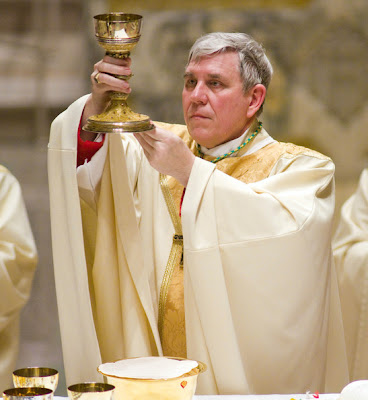 The final speaker at last weekend's Women of Christ Conference wasn't really there as a speaker, but rather, as one who would lead us all in prayer and worship. In saving the best for last, the conference organizers delivered a gem with Archbishop Listecki as the presider at Mass! His homily was outstanding! That holy man, who ends every single one of his columns and newsletters with the capitalized and bold words LOVE ONE ANOTHER, is himself, a perfect example of the Christian love to which we all strive.

I have searched in vain to find the source of Archbishop Listecki's list of "Reasons to Raise Children in the Catholic Faith" which he shared in his homily, so I am assuming that the list originated with him. Here is my attempt to share his words of wisdom from the few notes I quickly jotted down.

"Why to Raise Children in the Catholic Faith"

1. To give them rules to reject as teens.
2. To give them rules to reconsider when they have kids of their own.
3. To give them values to cherish.
4. To give them something to hang on to in hard times.
5. To have a raggedy "good news" bible to read when older and much more interested in reading the bible.
6. To learn that everyone wears the face of Christ in a different way.
7. To have faith in community.
8. To learn that Christmas is about the gift of love in our hearts.
9. To understand that Jesus' death and resurrection means that life is more than suffering.
10. To understand that heaven begins on the spot where they are standing, that they are here for God and that God is always with them.

~during the course of the day I gave out over 500 fliers promoting the Monthly Prayer Request for Priests and encouraged quite a few women to add their names to my email list so that I might send them information about the apostolate from time to time. My greatest joy was when Vicki Thorn, one of the conference organizers, the founder of Project Rachel and the emcee for the day, mentioned that if the devil wanted to hurt the Church he'd go after our priests, therefore, praying for our priests is one of the most important and loving things that we can do for our Church. As she spoke those words, I was standing on the side of the conference hall filled with thousands of women and I realized that I had quite a few fliers with me in my purse. While everyone roared out thunderous applause at her words, I took advantage of the situation and worked the crowd by handing out my fliers. For me, that was a moment of great fun and joy and I am very thankful to Vicki Thorn for conveniently and unknowingly handing me that opportunity!

~meeting a woman who had been pregnant 22 times, gave birth to 15 children and breastfed for over 30 years! Until she told me that she and her husband had recently celebrated their 50th wedding anniversary, I had thought that I was speaking to a woman who was in her 50's-she looked that great! When I told her so, she gave the credit to all of those pregnancies and the years spent breastfeeding her children-she said that all of those hormones in action have been very good to her! She said that her only regret in life was that although she has eight sons, not one of them is a priest. When she shared this sorrow with a priest who happens to be a friend of hers he told her that she and her husband were their own undoing in this case: they had such a beautiful marriage that all of their children wanted to aspire to that as well!

~watching one of the conference organizers, my friend Julie Sarnowski, in action. Seeing her moving about throughout the large conference hall in her efforts to keep things running smoothly during the event, I was amazed by her energy and inspired by her faith. I am so very grateful to her and to all of the conference organizers for putting together a day filled with grace for so very many women in the Milwaukee Archdiocese, a day which I will long remember and rejoice over!
Posted by Anne at 7:01 AM