The Tassel on His Cloak

"Whatever villages or towns or countryside he entered, they laid the sick in the marketplaces and begged him that they might touch only the tassel on his cloak; and as many as touched it were healed." Mark 6:56 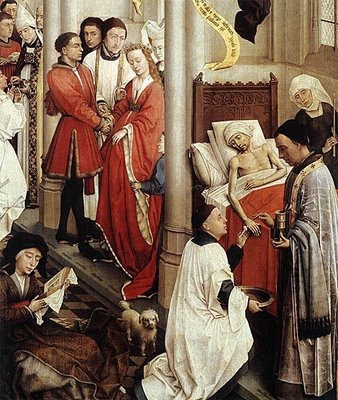 My son John will be Confirmed this April and he has asked his friend, Fr. Matthew, who was ordained to the priesthood just last May, to be his Confirmation sponsor. Fr. Matthew has had a profound impact on John's life in the past few years. During his time in Seminary, he witnessed to John and to our whole family, the deep joy that he has for this vocation to which God has called him. As John's sponsor, he has spent a great deal of time with John at parish sponsored Confirmation meetings, in visits to our home and in time spent visiting with him individually. Recently he had invited John and his friend Jerry to join him for dinner followed by a Milwaukee Buck's basketball game.

The night of the game, my family and I, along with Jerry, attended the Saturday evening Mass at Fr. Matthew's parish. During that Mass, the parish offered Anointing of the Sick to anyone who desired the Sacrament. The anointing, which was held as part of the Liturgy itself, involved the entire community in the Sacrament. Those who were to be anointed were asked to stand and as the priest came to anoint him, those who were sitting nearby reached out to place a hand on his shoulder or arm in a physical sign of loving support. In this way, the entire community was drawn into prayer for those who were ailing and in need of the Church and her Sacrament for the sick. The significance of witnessing this anointing was brought to light for me in view of John's story about how the rest of the evening continued.

After Mass, before leaving for dinner, Fr. Matthew had to stop in his office for a few minutes. While there, he received a phone call asking him to stop at the hospital to visit someone who was dying. John and Jerry stayed in the hospital waiting room watching television for two hours, while Fr. Matthew attended to the dying man and his family.

By the time the hospital visit was over, there was no time for dinner, so they grabbed some food at the concession stand during the game. After the game was over and Fr. Matthew dropped John and Jerry off at home, he went back to the hospital to spend some more time with the family in need of the spiritual assistance that his presence provided.

Hearing this story from John deeply moved me. I think that the fact that John and Jerry, both of whom are discerning calls to the priesthood, were able to witness the love and care and time that Fr. Matthew brings to his vocation, was a real blessing for them. They had a first-hand opportunity to see the tremendous self-sacrifice that is involved in this sacred ministry. And I know that this moment in time was just a very small snapshot of the many, many ways that Fr. Matthew and all priests, are called to give of themselves for the good of the people of God whom they serve. Fr. Matthew, with sweat on his brow and love in his heart, offered the tassel on His cloak to the sick and the dying, at Mass-and again-at the hospital bedside. He gave the very real gift of Christ through his selfless service and his loving touch.

Our family has been greatly blessed with the gift of Fr. Matthew in our lives and for his presence, I am deeply grateful. So, to my list of weekly gratitude I add...

~Fr. Matthew and his fine example of priesthood

~family photos lining my desk at work, reminding me of love

~throat blessing on the Feast of St. Blaise, candles beside my face holding me in His grace

~lessons learned about my sin-sick nature which cause me to remember my total dependence on God alone, for no one else can carry that ugly weight that I often inflict upon myself and others but the Mighty Redeemer

~the mania of five ecstatic children in my living room as the Green Bay Packers win Super Bowl 45!