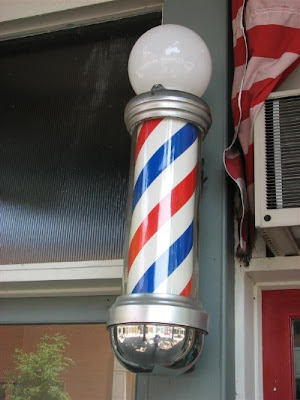 My friend Fr. Don is sporting a snazzy new hair cut and the story he tells is that he visited an old-fashioned barber shop in Indiana. It seems that the barber took a full thirty minutes to cut his hair using a razor and then only charged him $5.00. It's so uplifting to hear that places like this still exist in this day and age of hurry up and pay a lot. Fr. Don's story reminded me of a similar hair-cutting experience that my son John and I had a few years ago...

My mom's greatest wish in life was that one of her six daughters would become a beautician so that she would be guaranteed beautiful hairstyles for the rest of her life. Alas, it's rare that our hopes and dreams are achieved through our children and my mother did not receive her wish, although all six of us did our best at styling mom's hair. I have fond memories of giving her many permanent waves and spending Saturday nights rolling her hair into pin-curls with dippity-do and bobby pins.

I suppose all that practice was good preparation for motherhood, if not for a career in hair styling. From the time my boys were babies I cut their hair myself to save money on barber shop visits. I never did a very good job and when they were little, it was a dreaded ritual for my sons. When my oldest son was very small, I set up the high chair in the back yard and set to work trimming his bangs. As soon as I stepped away for a moment, John bolted out of the high chair and ran around the house to escape the hated haircut. George, our balding next door neighbor was outside watching and he laughed and called out to John, "Run, John! Run fast! You don't want to look like me, do you?"

As the children grew they began to accept their home-style haircuts, but every now and then, for a treat, I'd take them to get their hair professionally done.

It was early one summer and John was out of school before the rest of his siblings, so I took him for a visit to Otto the Barber of whom I'd heard good things. The plain brick building bore a simple sign that read "Haircuts." As we entered the shop, we saw an older man sitting in the chair, receiving the final expert snips to finish off his haircut. When he walked out the door, Otto turned to John and I. He was tall, slim and very handsome. His silver hair was neatly cut.

"I don't style hair," he said with a heavy German accent, "I only cut it." We assured him that we were only looking for a basic, clean haircut.

John settled into the chair and Otto slipped the cape around his shoulders and began trimming his hair with an electric clippers. After Otto made a few comments about how he wished he were still in school so that he could have the summers off, the shop fell silent except for the hum of the clippers.

I contemplated the scene in the shop with amusement. The room was old and dirty, with big clumps of gray hair all over the floor, indicating that most of the customers were older men. The two chairs, covered in duct tape, had obviously seen better days. The wall behind them was covered with black and white hairstyle photos that looked like they were from the 1970's. The magazine racks were filled with National Geographic magazines dating back to 1968! I felt as though I had stepped back in time! The shop bore a faint smell that reminded me of a nursing home. It was certainly a man's shop without any sign of a feminine touch.

A few more snips and clips and John was looking neat and presentable. Otto asked where John usually gets his hair cut and I told him that I always cut his hair myself and confessed that I wasn't very good at it. He disagreed with my self-critique and said, "I didn't see any problems with his hair. What are you, a beautician or a barber?" "Neither," I replied, "just a mom." "Well, you're very good," he said, "I'd hire you!" And had he done that, he would have been out of business in no time!

I am so grateful that in this modern world, there are still some places where old-fashioned service and hospitality are more important than being the biggest and the best. How wonderful that little shops like that of Otto the Barber still exist today!
Posted by Anne at 7:26 PM