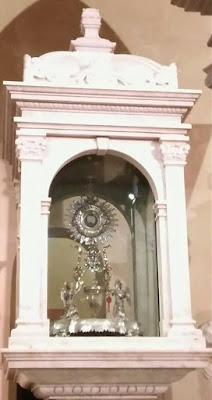 Of all of the locations on our itinerary, seeing the Eucharistic Miracle of Lanciano was the one I most looked forward to and was most excited about.   The Eucharistic Miracle happened in the year 750 when a Basilian Monk was offering Mass with doubt in his heart about the Catholic belief regarding the Real Presence of Christ in the Eucharist.  As he was praying the prayer of consecration, the host started bleeding in his hands.  Many tests have been performed over the centuries, the most recent done in 1973,  and it has been determined that the host consists of muscular tissue of the heart and the wine is five globules of blood which represent the five wounds of Christ on the cross. The globules weigh the same separately as they do collectively.  The blood type is AB. To this day the Eucharistic species has remained exactly the same as it appeared twelve centuries ago despite the effects of time and elements.

I've often wondered about that Basilian Monk to whom the miracle occurred, the miracle which undoubtedly removed all of his questions about the reality of Christ's flesh and blood present in the Eucharist.  What happened to him after the miracle?  Did he become a celebrity?  Did he spend every day for the rest of his life performing penances in atonement for his doubt?  Did he quietly leave his community to maintain some sort of privacy and solitude in his life?  Is he now a saint in heaven to whom we should pray?  And why is it that his name has remained anonymous and he is simply known as "a Basilian Monk"?

We arrived in the small city of Lanciano with just a small amount of time for our visit to the Church of Lagontial, a very unassuming building which houses the monstrance that contains the flesh and blood of Jesus. We were allowed a few minutes to reverence the Eucharistic Miracle up close before we were shown a video showing the history of the Miracle and then we were given a short time, about half an hour, to spend in adoration or to explore the church and gift shop before Mass would begin.

I darted right back to the small room behind the altar to spend time alone with Jesus.  When I arrived there were two other people adoring the Lord, and soon after a small group of musicians came into the room to practice the music for the upcoming Mass.  I thought that was a very odd place for the musicians to practice, and then realized that this was the area where they played for the Mass that was now beginning.  I quickly left that area out of respect for the Mass and so that I could have more solitude in my prayer.  I found that there wasn't anybody in the small space on the back side of the altar where we first reverenced the Eucharist and there I stood, face to face with the Body and Blood of Jesus. I reached out my hand and touched the glass that protected the monstrance, not sure whether it was allowed or not, but unable to resist. Standing and praying there was the most amazing experience of my life!  I wanted it to last forever, I never wanted to leave!  But, all too soon it was time to go.

I found Paul in the lobby area and just as we were leaving for the bus, some of the members of our group told us that they found the original chapel where the miracle occurred.  We followed them to a basement chapel and quickly took photos and offered another prayer of thanksgiving before we left.  We journeyed to a nearby restaurant for dinner.  It felt strange to be conversing normally with others and to be enjoying a meal when not more than an hour ago I was in the Presence of the Lord up close and personal.  I didn't want the spell of that amazing moment to be diminished by ordinary life.   Yet, aren't we called to take our faith out into the world? And so I heartily enjoyed that evening's meal but held the memory of that moment deeply within my heart.  Little did I understand that my faith was about to be further deepened the following morning when we visited Manopello to see the veil that covered our Lord's face in the tomb.


While those questions of mine about the Basilian Monk may never have an answer in this lifetime, what has been answered for all of humanity is the actuality of the Real Presence in the Eucharist and truly, that's all that matters. Seeing with the eyes of faith is a beautiful thing, but to actually see the flesh and blood of God in reality, well words simply cannot capture the immensity of joy that filled my heart to be there in Lanciano, and forever after, whether I am at daily Mass or spending time in adoration, my faith in Christ's presence has been deepened and will never be altered.  I pray that everyone may one day share this same belief in the Real Presence of Christ's body and blood in the Most Holy Eucharist.