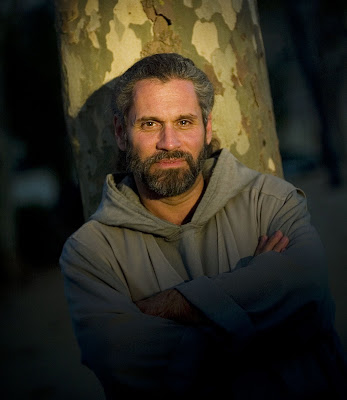 I am richly blessed by the God of surprises. He has provided me with everything I could ever need to satisfy me. He gives me a little suffering, a little joy and a lot of love. What else could I ever ask for? God is soul good!

What I love the best is when He sneaks up and sends me something fun just when I need it the most. Like yesterday, for example. I received an email from my friend Julie. She was passing on a message from the University of Wisconsin-Milwaukee Campus Minister, Fr. Michael Lightner, telling me that none other than Fr. Stan Fortuna would be appearing on campus that very night for a free talk and concert!

I raced home from work, picked up my son, John and we went to get my friend, Marge, and the three of us hurried to the UWM campus, thinking that the place would be packed by the time we got there. We arrived fifteen minutes before the program was to begin. We found Fr. Stan and a few assistants in the auditorium rehearsing, all alone. Nobody was there! We thought that maybe we had made a mistake about the starting time. But we didn't. In fact, by the time Fr. Stan was ready to start, there were only about twenty people there! We had front row seats to the best concert/inspiration talk/comedy show we had ever seen!

He had us laughing, crying and tapping our feet and lifted our hearts and souls to heaven so easily! There he stood in his grey habit, the bottom hem ripped and pinned in the front, long, thick locks pulled back in a pony tail. He was a one man concert with a recording machine that replayed each sound he played so that it sounded as if he had a whole band with him. He sang a great song to the tune of George Benson's "This Masquerade" about how God comes to us in distressing disguises. He said he wrote that song after first baptizing his guitar.

He shared the story about how God called him to the priesthood. He said he was about as low as a person can get, but then God got lower. That was followed by a Bob Marley impression of a song called "You Go Low, He Go Lower". Then he treated us to one of his rap songs called "FAMILY-Forget About Me I Love You". Every time I looked at my son, he had a huge smile on his face. That's a sight I will never forget! John had the time of his life listening to Fr. Stan sing and speak.

He spoke about how he wants to write a book called "The Rebukes of Jesus", he told us that God gave him a Divine upper cut when he called him to the priesthood, and talked about the baboons in Uganda in a hilarious example of how everybody peels bananas in a different way. He shared stories about life in the Bronx with the poor, mixed in with a few quotes from JPII and B16. But his biggest and most important message was that all hurt comes from no love and we are all called to love. Just love. What a beautiful message.

The evening ended with ten minute long blessing and a handshake from the amazing priest. It was simply fabulous and I am blessed! I had the time of my life and I am spiritually renewed! If you ever get the chance to see Fr. Stan, I highly recommend it, even if it comes last minute!
Posted by Anne at 7:05 AM