Cardinal Dolan: Who Do You Say That I Am?

This past Wednesday, at daily Mass, Bishop Sklba shared a charming story about Cardinal Dolan.  It seems that Bishop Sklba spent some time in New York visiting the Cardinal and they decided to go for a walk to a museum that was about a mile away.  It was probably the longest mile they ever walked because Cardinal Dolan couldn't take more than two steps before people would recognize him and ask him to pray for them or would share their concerns with the good Cardinal.  Bishop Sklba said that he imagined that Cardinal Dolan has a good idea of what Jesus felt like in  the passage from Luke 4:38-44 where the people were all bringing their sick to Jesus and tried to preventing him from leaving their town because they were so pleased with all of the good he was doing.  Everybody just wants him to stay nearby.

It's clear that the people of Milwaukee are certainly pleased with Cardinal Dolan for all of the good that he does and we want him to stay nearby as well, as was evident by the crowd of 4000 people who showed up at the Milwaukee Theater to hear him speak at the tenth annual Pallium Lecture, the lecture series that Cardinal Dolan himself started when he was Archbishop of Milwaukee.

The evening's emcee was Fr. Paul Hartman, the president of Waukesha's Catholic Memorial High School.  On surveying the size of the crowd, Fr. Paul cracked that it was a normal size for Cardinal Dolan's typical Sunday Mass at St. Patrick's Cathedral, the size of a symposium given in San Francisco by Bishop Sklba, and the size of Bishop Hying's fan club!  Cardinal Dolan commented that the crowd of 4000 was bigger than a normal Met's game!

Cardinal Dolan's topic was "Who Do You Say That I Am?  Encountering Christ and Responding to Christ through His Living Body, the Church."

Cardinal Dolan began his talk with these loving words:  "My seven years in Milwaukee were extraordinarily happy ones and I miss you."  Then he joked that four cardinals have come from Milwaukee, and one day Milwaukee will have it's own version of Mount Rushmore with the four cardinal's faces all engraved upon the Allen-Bradley clock tower!

He shared the story of how, when he was still an auxiliary bishop in St. Louis, he was called to the apostolic nuncio's office.  He was offered a cigarette and he declined because he doesn't smoke.  Then he was offered a drink, and he said no thanks, he'd wait until they went out to dinner.  Then the nuncio told him that Pope John Paul II wanted him to be the Archbishop of Milwaukee and to that the Cardinal said, "I'll take that cigarette and drink now!"

After the laughter subsided, Cardinal Dolan became dead serious about his topic for the evening.  He began by sharing the story of St. Paul falling from his horse and the Lord's question of him, "Saul, why are you persecuting me?"  He didn't ask, why are you persecuting my Church, but why are you persecuting me.  That's because Jesus and His Church are one, synonymous, a package deal.   St. Paul loved the Church and Jesus passionately because they are one.  He then quoted Henri de Lubac regarding the Catholic Church:  "For what would I ever have known of Him without Her?"  He said we can't call God our Father if we don't call the Church our Mother.

Cardinal Dolan spoke about the post-ecclesiastical world in which we live where we want the King without the Kingdom, to believe without belonging, spirituality without religion and Christ without the Church.  Impossible!  He quoted Archbishop Listecki who said, "There is no freelance Christianity.  Without the Church, there is no Christ."

In speaking of the many Catholics who refer to themselves as "former Catholics," those who have fallen away from the practice of the church, he suggested three possible roads as a model to bring those lapsed Catholics back to the fold.

The Church is my spiritual family.  Ninety-nine percent of Catholics are born into the faith.  It's in our DNA, our bones, our genes.  We might drift and get mad and be scandalized or confused by it.  So what?  Our spiritual family is just like our human family.  We get angry, scandalized and confused by our human family too.  "Have you ever met my brother Bob?" he joked.  But we never leave our family.  We are there at all of the pivotal moments-Christmas, Easter, births and deaths.  We're at the table every Sunday.  We're stuck with our last names whether we like them or not.  Catholics are marinated, seasoned in the Church.  The Church is my spiritual family.  It's my  home.

He shared an example from the book, "The Power and the Glory" by Graham Greene.  In it, a whiskey priest from Mexico was hiding in a barn, and a young girl who was helping him suggested that he renounce his Catholic faith for his safety.  The priest replied that it would be impossible, he could never do it.  And then the girl understood that the Catholic faith is like a birthmark, it is always a part of who you are.  You are born with it and it will remain with you forever.

Apologetics is the art of credibly, convincingly presenting our faith.  It's not  in-your-face and brash,  but rather a humble, cheerful, rational, confident grounding in faith.  The Cardinal used an example familiar to every parish priest at this time of year.  A young man leaves home for college after a strong Catholic upbringing with regular Sunday Mass attendance and an education at Catholic schools.  At his first visit home he tells his parents that he doesn't go to Mass anymore.  Instead he is attending the church of his roommate.  The parents are filled with sorrow and question how this could have happened.  The answer is because the roommate was well-off in apologetics and swayed their son away from the Catholic faith.

The Church is necessary for salvation.  We have survived dungeon, fire and sword. Apologetics prepares us to defend our faith against those who would take it from us.  Those liberators might be late-night talk show hosts or writers of newspaper editorials.  We have to be strong in knowledge of our faith so that when they accuse us of worshiping the Pope, or of being cannibals, or of treating Mary as if she were God, we can remain strong.  We need to let them know that we cherish our Church and are prepared to care for it.  That is apologetics and we need it more than ever.

We need to fess up to the sinful side of the Church.  We need it.  People are shocked, saddened and sickened by acts of the clergy and hierarchy.  It's been said that the Catholic Church is clearly from God because no human organization that is run with such imbecility could have survived two weeks let alone 2000 years!

It was Flannery O'Connor who said, "Suffering for  the church doesn't bother me.  It's suffering from her that's hard to take!"  Blessed Pope John Paul II apologized fifty-five times during the Jubilee Year for the past sins of the Church and Ronald Rolheiser describes the Church as Christ hanging between two thieves.  But where sin abounds, grace abounds all the more.  After the resurrection, Jesus showed us that His wounds remained.  We are also wounded.

The Cardinal shared a story from Bishop Skbla about a parish in the northern regions of the Archdiocese that was being closed.  The parishioners came to accept the closing and after all of the sacramentals had been removed and only an empty building remained, it was decided to burn the building down as a sacred offering.  Everyone came to watch as the volunteer fire department set the blaze which burned so intensely that everyone had to back away.  The next morning, Bishop Sklba returned to find people with gloves on gathering up the thick nails that were stacked up along the foundation.  They were collecting them as souvenirs.  It was the nails that had held the church together.  It's the nails of Christ that hold the Church together.  We are a wounded Church and we love Her all the more for Her wounds.

When people say that they left the Church because She's so sinful, we say we cling to Her because we are too. St. Francis de Sales had a simple motto written on his tombstone:  "He loved the Church."  That needs to be our motto, too.  We believe in One, Holy, Catholic and Apostolic Church and She gives us the answer to Christ's question, "Who do you say that I am?"

To learn more about the Pallium Lecture Series visit this link.  Photos below courtesy of Mary Anne Urlakis.  Thanks, Mary Anne! 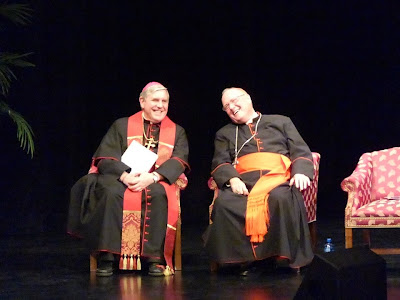 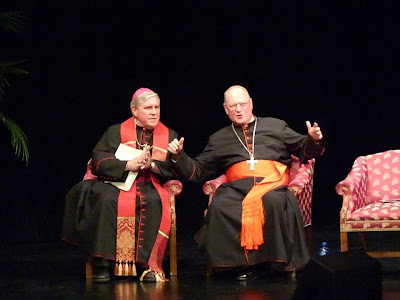 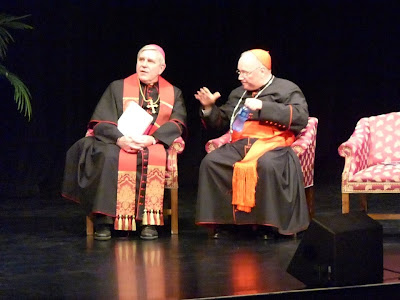 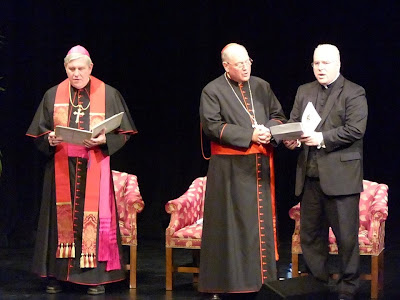