Pondering Pages/No Wonder They Call It The Real Presence 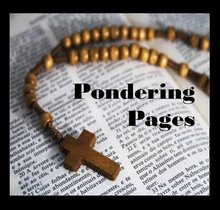 Every once in a while, a book comes into my hands that just had to be placed there by divine intervention, and this one truly qualifies. I wish I could remember who it was that suggested this book to me because I want to thank them. I especially want to thank my friend Kathy at the Salzmann library who special-ordered this book at my request! It is really fabulous! No Wonder They Call it the Real Presence:Lives Changed by Christ in Eucharistic Adoration by David Pearson recounts the stories of nine men and women whose lives have been deeply affected by the time that they spent praying before the exposed host.

Each story had something in it that stood out as a reminder of my life, whether a current event or something from long ago, and my heart was moved.

I especially enjoyed the story about Mal whose two stepchildren died, followed by his wife. The experience of loss that he felt at losing his two stepchildren was overshadowed by the loss he felt when he realized that his wife loved Jesus more than she loved him, and he knew he couldn't compete. But by the time he tragically lost his wife, Mal had also fallen deeply in love with Jesus, and even though he had suffered so much in his life, he was so on fire for the Lord that joy was all that came through in his story.

The expression "save the best for last" was definitely true in the story of Simonetta. She was a revert to Catholicism who was fortunate to be allowed to spend seven and one half minutes with Fr.John Hardon, SJ. She asked him if she needed a spiritual director and he told her no. He said "My spiritual director is my journal. God is my spiritual director. Trust me. You need to write, and write and write some more. God will talk to you through your journaling. Spend time before the Eucharist, and write." She complained that she wasn't very good at writing and didn't think that was her calling. He replied, "Write." Later she went to confession and this is the penance that the priest gave to her-"Spend an hour in front of Jesus in the Eucharist, and pray. And what I also want you to do is write before the Blessed Sacrament." So off she went to adoration and there she "cried for the entire hour. I knew he was really present. And I wrote and I wrote and I wrote."

I had a similar experience in confession with a priest whom I had never met before who told me that I should continue to write because through this means I would draw souls to Christ. It seems impossible that a priest who is a stranger to you could utter a few words that would start a new calling in your heart and have the power to not only change you, but to also change others through you.

I was amazed as I read these stories and learned that I am not the only person to have felt the power of God through both adoration and confession. To me, reading this book was a little miracle of affirmation and I would highly recommend it to others.

from St. Augustine: "He took earth from earth, because flesh is from the earth, and he took Flesh of the flesh of Mary. He walked on earth in that same Flesh, and gave that same Flesh to us to be eaten for our salvation. Moreover no one eats that Flesh unless he has adored it...and we sin by not adoring it."
Posted by Anne at 12:00 AM