I'm always easily suggestible, especially when it comes to books, so when Fr. Jim Kubicki, SJ, the National Director of the Apostleship of Prayer, began his talk on Heroic Catholicism by mentioning the book The Road Less Traveled by M. Scott Peck, and specifically mentioned that what was so interesting about it was that it began with three little words, "Life is difficult", my interest was piqued and it was off to the Salzmann Library at St. Francis de Sales Seminary to pick up a copy.

Now The Road Less Traveled is not a religion book, it's a psychology book, with four sections explaining how to deal with this difficult life:  Discipline, Love, Religion and Grace.  Dr. Peck shares stories of his past patients and how he helped them cope with their neuroses and psychoses.  I admit that at several points I felt as though he was really writing about me personally and maybe I should put the book down and head over to my nearest psychoanalyst to spend some time laying down on his couch and letting him analyze just what it is about me that makes me so neurotic.   And when I came to the section on religion where he speaks about a woman whose entire problems stemmed from the fact that her mother made her go to Mass and follow the teachings of the Catholic Church I thought that maybe I'd better bring all of my children along with me on that visit to the psychoanalyst's couch.  After all, they surely will all be headed there in the future anyway since I also make my children go to Mass and follow the teachings of the Catholic Church.  Why not save time and energy and just take them there now before I mess them up too much?

You'd think that since I do most of my reading while getting my daily exercise on the elliptical machine, with headphones blasting classic rock or current pop songs into my ears, that it would be hard for me to really get much benefit or understanding out of the books I read, but when I got to the section on Grace, Dr. Peck's words got through to me loud and clear.  I found his ideas about the opposite of love to be fascinating.  In his opinion, the opposite of love isn't hate, it's laziness.

Regarding Adam and Eve and original sin he says: 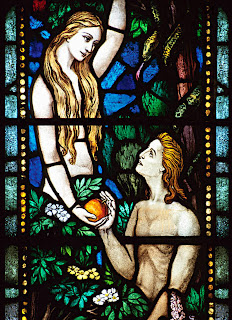 "The key issue lies in what is missing.  The story suggests that God was in the habit of "walking in the garden in the cool of the day" and that there were open channels of communication between Him and man.  But if this was so, then why was it that Adam and Eve, separately or together, before or after the serpent's urging, did not say to God, "We're curious as to why You don't want us to eat any of the fruit of the tree of knowledge of good and evil.  We really like it here, and we don't want to seem ungrateful, but Your law on this matter doesn't make sense to us, and we'd really appreciate it if you explained it to us"?  But of course they did not say this.  Instead they went ahead and broke God's law without ever understanding the reason behind the law, without taking the effort to challenge God directly, question His authority or even communicate with Him on a reasonably adult level.  They listened to the serpent, but they failed to get God's side of the story before they acted.

Why this failure?  Why was no step taken between the temptation and the action?  It is this missing step that is the essence of sin.  The step missing is the step of debate.  Adam and Eve could have set up a debate between the serpent and God, but in failing to do so they failed to obtain God's side of the question.  The debate between the serpent and God is symbolic of the dialogue between good and evil which can and should occur within the minds of human beings.  Our failure to conduct-or to conduct fully and wholeheartedly-this internal debate between good and evil is the cause of those evil actions that constitute sin.  In debating the wisdom of a proposed course of action, human beings routinely fail to obtain God's side of the issue.  They fail to consult or listen to the God within them, the knowledge of rightness which inherently resides within the minds of all mankind.  We make this failure because we are lazy.  It is work to hold these internal debates.  They require time and energy just to conduct them.  And if we take them seriously-if we seriously listen to this "God within us"-we usually find ourselves being urged to take the more difficult path, the path of more effort rather than less.  To conduct debate is to open ourselves to suffering and struggle.  Each and every one of us, more or less frequently, will hold back from this work, will also seek to avoid this painful step.  Like Adam and Eve, and every one of our ancestors before us, we are all lazy.

So original sin does exist; it is our laziness.  It is very real...laziness takes forms other than that related to one's responsibilities to others.  A major form that laziness takes is fear...Adam and Eve can again be used to illustrate this.  One might say, for instance, that it was not laziness that prevented Adam and Eve from questioning God as to the reasons behind His law but fear-fear in the face of the awesomeness of God, fear of the wrath of God.  But while all fear is not laziness, much fear is exactly that....So it is quite probable that Adam and Eve were afraid of what might happen to them if they were to openly question God; instead they attempted to take the easy way out, the illegitimate shortcut of sneakiness, to achieve knowledge not worked for, and hope they could get away with it.  But they did not."

Dr. Peck's reasoning makes sense to me, and it reminded me of Archbishop Fulton Sheen's poem, "Complain!" that I recently shared here on this blog, because both Dr. Peck's idea and Fulton Sheen's poem encourage complaining to God, not others, whenever we are troubled, unhappy or indecisive.  We should take our concerns to God alone and then silently wait for His answer.  That the silent waiting may take days, weeks, months or years, it doesn't matter.  The point is that God's will for our lives will always be made known to us if we are only willing to do the hard work of asking God, "What do You want from me?  Why did You allow this suffering to take place in my life?  How can I use this experience for Your glory?  What is Your will for this situation and for all of my life?"  And then wait in humble and quiet anticipation for His answer to be revealed to us through the people and events of our lives.