(The fourth in a series of posts praying the Stations of the Cross...begin here and then follow along each day.) 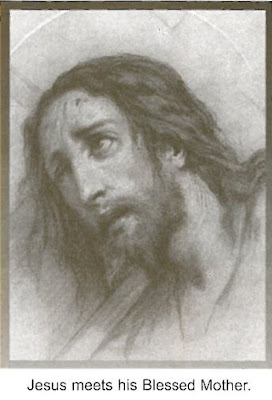 It would be hard to conceive a moment at once of deeper anguish and of higher exaltation than that moment when the eyes of Jesus met the eyes of His Mother, as the Son passed by on the way to Calvary.  In that brief instant two worlds, two suns of burning love, fused into one universe, mutually attracting and balancing each other, with their love for each other as the attracting, and their love for men as the repulsing force.  In that moment the perfection of their mutual love revealed itself, as so often must our loves on earth, not by retarding but by encouraging each other in sacrifice.

Jesus, You could not have given me more striking proof of love than this: for me and for my salvation You passed Your sinless Mother by.  For human love it is written that a man shall leave his father and mother, and yet on the way to Calvary I witness a mystical yet no less real manifestation of that mysterious love which has drawn me out of the womb of nothingness and destines me by Your saving grace for life eternal.

Dearest Mother, on the way to Calvary, you gave up Your Son-the Bridegroom of souls-to me; that I may be less unworthy of that sacrifice, help me this day to give up some small thing for you.

(From The Holy Face in the Way of the Cross with etchings by Hippolyte Lazerges and reflections by  Father Page, C.S.C. aka Fr. Gerald Fitzgerald, sP, the founder of the Handmaids of the Precious Blood, published by the St. Columban's FathersForeign Mission Society)

Email ThisBlogThis!Share to TwitterShare to FacebookShare to Pinterest
Labels: Fr. Gerald Fitzgerald SP, Handmaids of the Precious Blood, stations of the cross