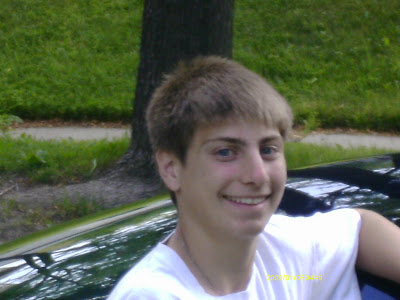 It's my first baby's birthday today! Baby no more is more like it! John Paul was born on the fifteenth anniversary of Pope John Paul's election to the papacy and the Feasts of St. Margaret Mary Alacoque and St. Hedwig. It also fell on Sweetest Day that year, and I can vouch that he is one sweet boy!

As our first child, he was certainly the one that Paul and I fretted over the most! Paul was (and still is) the most doting father to his first son! When John was a baby and he'd be in the car with us, Paul wouldn't drive faster than 15 miles an hour and would only listen to very quiet easy listening music (he's usually a fan of very hard rock!). We just couldn't bear it if anything bad would befall our wonderful little son. Of course, that extreme gentleness didn't last. By the time sons two and three came around, our house became a wild wrestling, running, jumping, chaotic playground of fun and fights!

I'll never forget the feel of John's soft baby cheeks next to mine or his sweet baby smell! I can still see him dancing to bluegrass music as a toddler. My mind can picture him peddling his bicycle without the training wheels and how I prayed that he wouldn't fall! Watching him receive Jesus for the first time caused my heart to swell with pride, and the swelling came again when he served at his first Mass, and lectored for the first time. Listening to him sing in the church choir gives me goosebumps, especially when he has a solo. But after his first-ever solo when all of the girls in his class gathered around to compliment him on his singing, batting their eyelashes and gushing praise, my defenses kicked in and I told them to scatter so his number one fan (me!) could give him a big hug!

Sixteen years have flown quickly by! Today he is taller than me and probably smarter than me as well! He's driving with great skill and will soon receive his permanent driver's license. He takes charge as the head of the family whenever Paul and I are away. He is kind, gentle, funny, fair and his faith is deep. For all of these attributes I am very thankful to God. But most of all, I am thankful to God for simply blessing my life with my beautiful son, John Paul

Won't you take a minute to stop by his blog and wish him a Happy Birthday today? You can find him at Writings of a boy discerning God's call
Posted by Anne at 12:00 AM

Email ThisBlogThis!Share to TwitterShare to FacebookShare to Pinterest
Labels: family