Consecration to Jesus through Mary according to St. Louis de Montfort

Today I had the great honor and privilege of Consecrating myself to Jesus through Mary according to St. Louis de Montfort. This post will describe a little bit more about what it means to be consecrated and the process that it entails.

Last year, my sister Cindy and I attended a conference at Mother of Good Counsel Church in Milwaukee which explained a bit about St. Louis de Montfort and his consecration. The day began with the Sacrament of Reconciliation and Mass followed by the conference talk given by Fr. Don Hying, the Rector of St. Francis de Sales Seminary in Milwaukee. Then everyone gathered around a Shrine of St. Louis de Montfort to pray the rosary, followed by the consecration for those who were participating and then the day ended with a benediction. The program was hosted by a woman whose mother had been responsible for the installation of the Shrine at Mother of Good Counsel Church. This year was the 55th year in which the Consecration Conference was held at Mother of Good Counsel. However, it is not necessary to attend a conference in order to consecrate yourself to Jesus through Mary. It is something that you can do on your own. 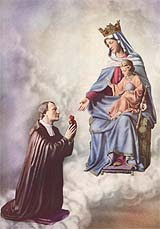 At the time when my sister Cindy and I had attended the Conference last year, I had never heard of the Consecration. We had only attended because it sounded like a nice, spiritually enriching program. This past year as I began the great blogging adventure, I ran across several blogs in which people wrote about their experiences with the consecration and I was moved to learn more about it.

St. Louis de Montfort, who lived from 1673-1716, wrote a book called True Devotion to Mary. This book explains the Consecration in detail. If you are interested in consecration, it is recommended that you obtain, read and study this book. Before I was sure that I would consecrate myself, I picked up the book from our Seminary Library. After reading it, I was thoroughly confused and decided that the consecration was not for me as I really struggled to understand it. It wasn't until I purchased the book and read it again, that the process became more clear to me. Today as I was skimming through the book once more, (I own the version copywrited in 1941 with this final edition printed in 1985), I ran across a quote from Pope John Paul II that really surprised me. He said "It is from Montfort that I have take my motto 'Totus Tuus"(I am all thine). Someday I'll have to tell you Montfortians how I discovered De Montfort's Treatise on the True Devotion to Mary, and how often I had to reread it to understand it." It looks like I am in excellent company!!!

The book is divided into three parts: Devotion to the Blessed Virgin Mary, Perfect Consecration to Jesus Christ, and the Supplement. It is the supplement that explains the process for Consecration. To Consecrate yourself to Jesus through Mary, you must prepare for 33 days by saying certain prayers and reading selections from Scripture and spiritual books. Spiritual practices such as mortifications are also part of the preparation process. When the 33 days of preparation are complete, it is Consecration Day! After the sacrament of Reconciliation and the reception of Holy Communion "with the intention of giving themselves to Jesus Christ in the quality of slaves of love, by the hands of Mary", an act of Consecration is recited. In addition a special tribute such as a fast, a mortification, an almsgiving or a candle is offered.

After the Day of Consecration, the slave of Jesus and Mary recites the Crown of Mary daily. This prayer consists of three Our Father's and twelve Hail Mary's. The consecration is to be renewed annually, again beginning with the 33 day preparation period.

The Consecration is normally done on a Feast Day of the Blessed Mother. In my case, it was not a Feast Day of Mary, but since the whole month of October is dedicated to Mary, the Conference I attended is always held in this month.

If you are interested in learning more about this wonderful devotional practice but are unable to obtain a copy of True Devotion to Mary, Fish Eaters has a great website on the topic and includes everything you may need. For further reading about my experience in discerning whether or not to consecrate myself, you may enjoy the following posts: A Beautiful Holy Day, Consecration, and Pondering Pages/True Devotion to Mary. It is the comments to these posts that are truly wonderful and inspiring! Once again, I am deeply grateful to the blogging community for all of your support and encouragement. You are wonderful and I thank you for writing for God, you are doing more good than you can ever imagine!

Email ThisBlogThis!Share to TwitterShare to FacebookShare to Pinterest
Labels: Consecration