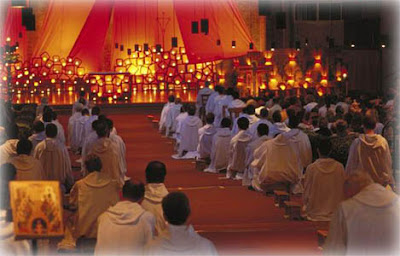 Darkness envelops the spacious yet intimate church. Then, one by one- beginning at the altar- the lights of hundreds of candles begins to cast a warm glow, banishing the dark and bringing about the light of the Risen Christ. Groups of candles draw attention to hand-painted icons portraying Jesus, Mary, and the Saints, each brush stroke a prayer by the painter. The church remains beautifully silent as all gather in peace. Our unified hush is a poignant prayer in itself, a prayer of love and worship. Quiet voices begin to chant, emphasizing a recurrent refrain, alongside chanted verses of Scripture. Silence resumes allowing the words of our chant to hover in the air and fill our hearts. Scripture readings are gently spoken followed by reflective silence that permits the Word to be immersed into our souls. This sequence of silence, song, scripture- with meditation and icons is the substance of the liturgical prayer from the Taizé monastery.

Taizé is the name of the village in Burgundy, France in which Brother Roger Schutz settled in 1940. Here, beginning in a plain farmhouse, he offered hospitality to refugees- particularly French Jews- suffering the hardships and dangers of WWII. By the end of the war, he began a common life of prayer with 6 other men who were committed to celibacy and a life of community. Their basis was the Rule of Saint Benedict, which Brother Roger greatly respected. Brother Roger devoted his entire life to the unity of all Christians. Although he had been a Protestant pastor, he entered into full communion with the Catholic Church, and every Pope has admired his foundation of a monastery that included Protestant and Catholic monks since the community’s beginnings. He died during evening prayer in Taizé on August 16, 2005.

Today the village of Taizé draws hundreds of thousands of visitors each year, seeking the community offered through prayer for all Christians. Led now by Prior Brother Aloïs Löser, Taizé brothers travel the world to encourage Christian unity in what they call “A Pilgrimage of Trust.” A strong Christian witness that crosses denominational lines, ages, and nationalities, is considered “a parable of communion,” extending reconciliation and the love of Christ to all.

Taizé Prayer is a beautifully peaceful time to contemplate God’s love and to allow His voice to be heard in the silence of your heart. A typical worship service includes: one or two opening songs, a psalm, a song of light, scripture readings interspersed with more song, a time of silence, a prayer of intercession or adoration, the Lord’s Prayer and a concluding prayer.

Taize’ Prayer is a “don’t miss” prayer occasion, a chance to escape from the busyness of the hectic pace of life and spend some quiet time with God. For more information about Taize’ visit: the Taize' Community. A special thank you to Speculator at La Vie Graphite for your helpful expertise in this story! Merci!
Posted by Anne at 12:00 AM