“Let the one among you who is without sin be the first to cast a stone at her.” John 8:7 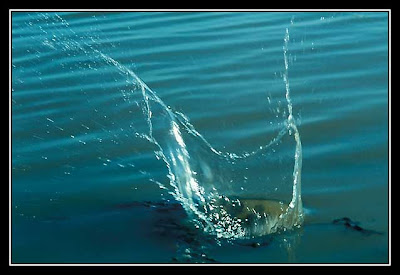 When you cast a stone into a still lake and watch to see what happens, you notice that the ripples brought about by that one stone spread wider and wider until a large part of the lake has seen an effect from that one stone. It’s like an echo in the water; it spreads far beyond its source.

The same can be said of casting stones at others. It’s so easy to be self-righteous and put blame and criticism on others for not acting in ways that we believe are right and good. We can put that same blame and criticism on ourselves, as well, causing that ripple effect of hurt and pain to spread out to others around us. Everyone we encounter can feel the ripple effect, the echo of our finger pointing, even when we point the finger at ourselves. It’s impossible for the one person upon whom the stone is cast to bear that pain alone. Before you know it, our families, friends, co-workers, and parishes all feel a bit of that pain caused by injustice.

Jesus challenges us to look within. Are we innocent, without sin? If we’re truthful with ourselves, the answer will be no.

Unclench your heart. Drop your stone on the ground where it will cause no damage. Quiet that echo, those repercussions of blame. Turn to the one being condemned, even if it’s yourself, especially if it’s yourself, and offer your love and mercy. A gentle word, a kind touch, a firm reminder of their dignity in the eyes of God and their call to live lives worthy of that dignity can stop the ripple effect of pain and bring about the solid foundation of a holy life in the eyes of God and others.
Posted by Anne at 12:00 AM