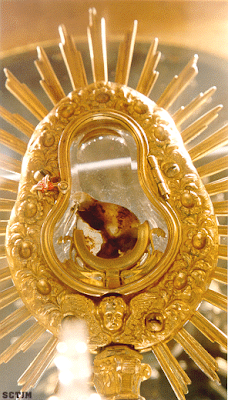 One of my favorite blogs, Offer it Up, is written by Fr. James Kubicki who is the national director of the Apostleship of Prayer stationed in Milwaukee, WI. He recently made a trip to Fatima and wrote about it on his blog. While in Portugal, he visited the city of Santarem to see the Eucharistic Miracle. Fr. James said "We were able to climb behind the high altar and venerate at closehand the miracle of a Host that turned to flesh and blood."

I had never heard of this before, but found his story and picture of the Miracle so fascinating, that I had to learn more about it! When I showed this picture to my husband Paul, he said, "If more people saw this, they would have to believe." It is in the spirit of bringing others to believe, that I am sharing what I have learned.

"The story of the miracle centers on an early-13th-century woman with an unfaithful husband. Desperate to regain his faithfulness and save her marriage, she consulted a sorceress. The sorceress said she would cure the husband's infidelity for the price of a consecrated host (Eucharistic wafer). After much deliberation, the woman decided to commit the sacrilege.

The next time she attended Mass at the 12th-century Church of St. Stephen, she took the consecrated wafer from her mouth, wrapped it in a veil and headed quickly for the door. But before she had taken more than a few steps, the host began to bleed. It bled so much that concerned parishioners thought she had cut her hand and attempted to help, but she ran out of the church.

Back at home, she threw the bloody host in a trunk in her bedroom. Her husband did not come home until late, as usual. In the middle of the night, they were both awoken by a mysterious light emanating from the trunk. The woman confessed to her husband what she had done and they both knelt in repentance before the miracle. The next morning, the couple told the parish priest what had happened. The priest placed the miraculous host in a wax container and returned it to the Church of St. Stephen. Word spread quickly, and the townspeople hurried to the church to see the miracle.

The next time the priest opened the tabernacle that contained the miraculous host, another miracle occurred! The wax container was found broken into pieces, and the host was enclosed in a crystal pyx. This pyx was placed in a silver monstrance, where it can be seen today.

The church was rebuilt in the 16th century." (From Sacred Destinations)

What I find to be most amazing about this story, is the fact that the woman and man to whom the miracle occurred didn't seem to be especially holy, in fact extramarital affairs and sorcery aren't usually the stuff of holiness, are they? I love that God will use anybody in any situation, to draw others to Himself. We truly have a beautiful God of surprises!